In 2017, craft brewers produced 25.4 million barrels, and saw a 5 percent rise in volume3 on a comparable base and an 8 percent increase in retail dollar value. Retail dollar value was estimated at 26.0 billion, representing 23.4 percent market share. Microbreweries and brewpubs delivered 76 percent of the craft brewer growth. Craft brewing’s growth occurred in the context of a total beer market which dropped 1 percent by volume in 2017.

“Growth for the craft brewing industry is adapting to the new realities of a mature market landscape,” said Bart Watson, chief economist, Brewers Association. “Beer lovers are trending toward supporting their local small and independent community craft breweries. At the same time, as distribution channels experience increased competition and challenges, craft brewer performance was more mixed than in recent years, with those relying on the broadest distribution facing the most pressure.” 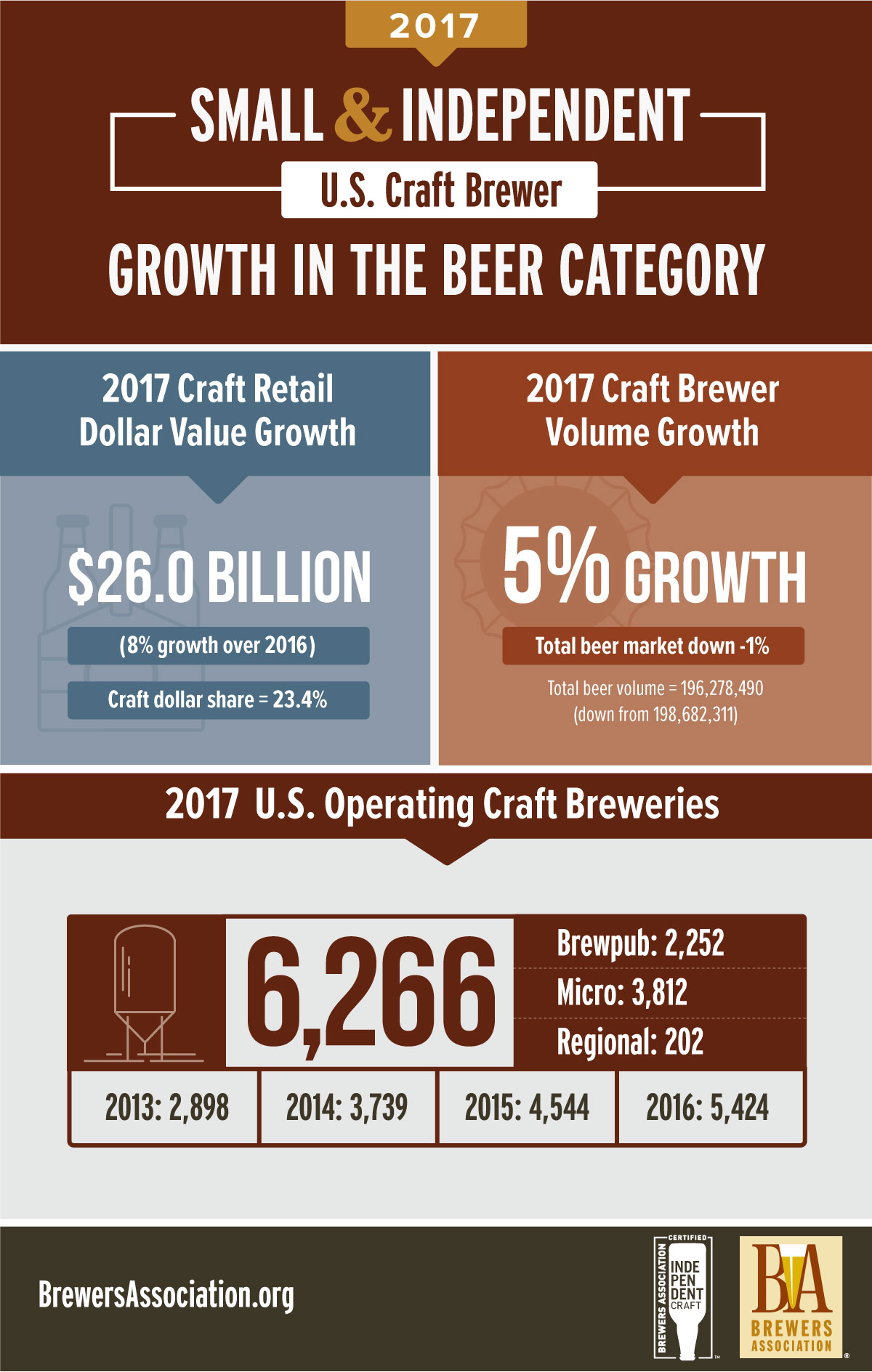 Additionally, in 2017 the number of operating breweries in the U.S. grew 16 percent, totaling 6,372 breweries, broken down as follows: 3,812 microbreweries, 2,252 brewpubs, 202 regional craft breweries and 106 large or otherwise non-craft brewers. Small and independent breweries account for 98 percent of the breweries in operation. Throughout the year, there were 997 new brewery openings and only 165 closings— a closing rate of just 2.6 percent. Combined with already existing and established breweries and brewpubs, craft brewers provided more than 135,000 jobs, an increase of greater than 6,000 from the previous year.

“Beer lovers want to support businesses that align with their values and are having a positive impact on their local communities and our larger society,” added Watson. “That’s what small and independent craft brewers are all about. The ability to seek beers from small and independent producers matters.”

To educate beer lovers about which beers are independently produced, the BA launched the certified independent seal in June 2017. More than 3,100 independent brewers have committed to adopting it.

Note: Numbers are preliminary. See additional methodology insights from Bart Watson, chief economist. A more extensive analysis will be released during the Craft Brewers Conference & BrewExpo America® in Nashville, Tennessee from April 30 – May 3. The full 2017 industry analysis will be published in the May/June 2018 issue of The New Brewer, highlighting regional trends and production by individual breweries.

1An American craft brewer is small, independent and traditional. Small: Annual production of 6 million barrels of beer or less (approximately 3 percent of U.S. annual sales). Beer production is attributed to the rules of alternating proprietorships. Independent: Less than 25 percent of the craft brewery is owned or controlled (or equivalent economic interest) by an alcoholic beverage industry member that is not itself a craft brewer. Traditional: A brewer that has a majority of its total beverage alcohol volume in beers whose flavor derives from traditional or innovative brewing ingredients and their fermentation. Flavored malt beverages (FMBs) are not considered beers.

2Absolute figures reflect the dynamic craft brewer data set as specified by the craft brewer definition. Growth numbers are presented on a comparable base. Full methodology.