Boulder, CO • March 12, 2013—The Brewers Association (BA)-the not-for-profit trade group representing small and independent craft brewers-today reported that the American craft beer industry set a new record for exports in 2012. Based on results from a recently-completed industry survey, craft beer export volume increased by an astounding 72 percent compared to 2011, with a value estimated at $49.1 million.

Canada remained the industry’s largest export market, with shipments increasing 140 percent by volume (up to 68,180 barrels) in 2012. Significant gains have been made in Ontario and British Columbia, and American craft beers are now gaining distribution in other provinces.

Sweden and the United Kingdom remained the next two largest markets. Though total exports decreased in both countries compared to 2011, the decline was offset by increased shipments to other European markets. In total, Western Europe accounted for 56,204 barrels valued at $14.6 million in 2012, a 5.6 percent increase over 2011. 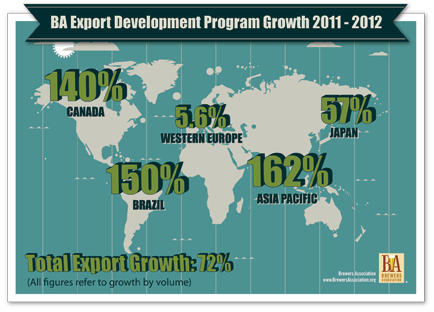 “The BA is very pleased with the continued growth in exports of American craft beer to markets around the world. Consumers continue to view American craft brewers as leaders in innovation and among the standard bearers for quality. Maintaining that perception is a priority for the craft brewing community,” said Bob Pease, chief operating officer, Brewers Association.

“Each year the EDP makes considerable progress in accomplishing the BA’s goals,” added Brett Joyce, Rogue Ales, chair of the BA’s Export Development Program committee. “Since its inception, we have worked to not only increase distribution, but educate international markets about the quality and diversity of products offered by American craft brewers. The results of our efforts in the international community have been extremely rewarding.”

About the Brewers Association:

The Brewers Association is the not-for-profit trade association dedicated to small and independent American brewers, their craft beers and the community of brewing enthusiasts. The Brewers Association (BA) represents more than 70 percent of the brewing industry, and its members make more than 99 percent of the beer brewed in the U.S. The BA organizes events including the World Beer Cup®, Great American Beer Festival®, Craft Brewers Conference & BrewExpo America®,  SAVOR?: An American Craft Beer & Food Experience and American Craft Beer Week®. The BA publishes The New Brewer magazine and its Brewers Publications division is the largest publisher of contemporary and relevant brewing literature for today’s craft brewers and homebrewers.