Another year, another record number of entries for the Great American Beer Festival (GABF) competition. Once again, all 50 states entered the competition with 19 states sending more than 100 entries—up from 18 states in 2015. In addition to already being the largest beer competition in the world, this makes GABF the most geographically diverse professional beer competition in the U.S.  If we use a common measure of market concentration (the Herfindahl-Hirschman Index, or HHI) to measure the geographic diversity of the competition, it gets a score of 663 (scores range from close to 0 to 10,000, with 0 as totally unconcentrated and 10,000 meaning one place/firm dominates). That’s what the Department of Justice would call a competitive marketplace! Even if you don’t appreciate my use of fancy economic indices, hopefully the point is clear: there are lots of entries from all over the place.

As I explained in 2014 and 2015, the best predictor of the number of medals a state will win is the number of entries. This year, the correlation between entries and medals won dropped a whole .001 and equaled .974. For those of you who never suffered through my college stats class, that means you can explain the vast majority of variation in medal winners by state based on how many entries they had (a score of 1 would be a perfect line-like relationship). More entries = more chances to win = more medals.

Expected medals won is a measure that takes into account not only the number of entries, but how hard the categories were that they entered. So in American-Style IPA, you have less than a one percent chance of winning, whereas your odds in German-Style Dopplebock or Eisbock are around 10 times higher.

California’s performance follows a similar pattern as last year. In technical terms, California breweries cleaned up. Not only did they enter harder categories than average (average expected rate is 3.9 percent), but they won at a rate more than a full point above expectation. Other states managed similar feats (see Virginia), but it’s hard to overstate how hard that is, given the massive number of entries from California. If we use the last three years of data, California has now won 5.2 percent of its entries (3,473 entries over three years) versus an expected 4.2 percent. With a sample size that large, there’s less than a five percent chance that would happen randomly, and suggests there are other factors that California is rising to the top–most likely its highly competitive marketplace.

Virginia also deserves a shout out. Other states have won at a higher rate (Wyoming won at a whopping 11.1 percent rate this year, including Pro-Am!), but it’s pretty rare with so many entries. Over the last three years, 30 states have entered 200 or more entries, and no one had ever won even six percent of those entries until Virginia’s performance this year.

In no particular order, some other made-up awards/things I found noteworthy:

The Gluttons for Punishment States

Arkansas was the state with the highest percentage of entries in American-style categories, with 37.5 percent of its entries entered in American styles.

The flip-side of Arkansas was West Virginia, where brewers entered 71.4 percent of their entries in British, German, or Belgian style categories.

Finally, let’s talk about style entries. If there was a “winner” in terms of styles entered, it was sours. American-Style Sour Ale saw the largest percentage jump of any category, from 1.28 percent of entries in 2015 to 1.93 percent of entries in 2016–a total jump of 56 entries. The top percentage gainers were an eclectic mix, and included Belgian styles (Saisons and Tripels), Field Beer, American-Style Amber Lager or Dark Lager (even controlling for the combined categories), Chili Beer, English-Style Summer Ale, Brett beers (combined Brett and Mixed-culture) and Munich Style Helles. If you can find a common thread there other than diversity, I want to hear your theory.

Amazingly, the two big drops were in IPA variants: Session IPA (down from 2.39 percent to 1.60 percent of entries) and American-Style IPA (still the most entered category, but down from 4.98 percent to 4.27 percent). Does this presage a drop in IPAs in the marketplace? Sales data begs to differ. This leads me to a gamer theoretic conclusion: brewers are entering more strategically, and steering away from categories they think they have a low chance of winning.

There is some evidence for this theory. The scatter plot below shows the percentage of entries a category represented in 2015 as well as the change between 2015 and 2016. As you can see, the data is pretty messy, but clearly many of the big drops came from the most entered categories in 2015. Whether this was simply people trying something new or being strategic is impossible to tell, but given how excited brewers look on stage when they win a medal, I’m going with the latter. 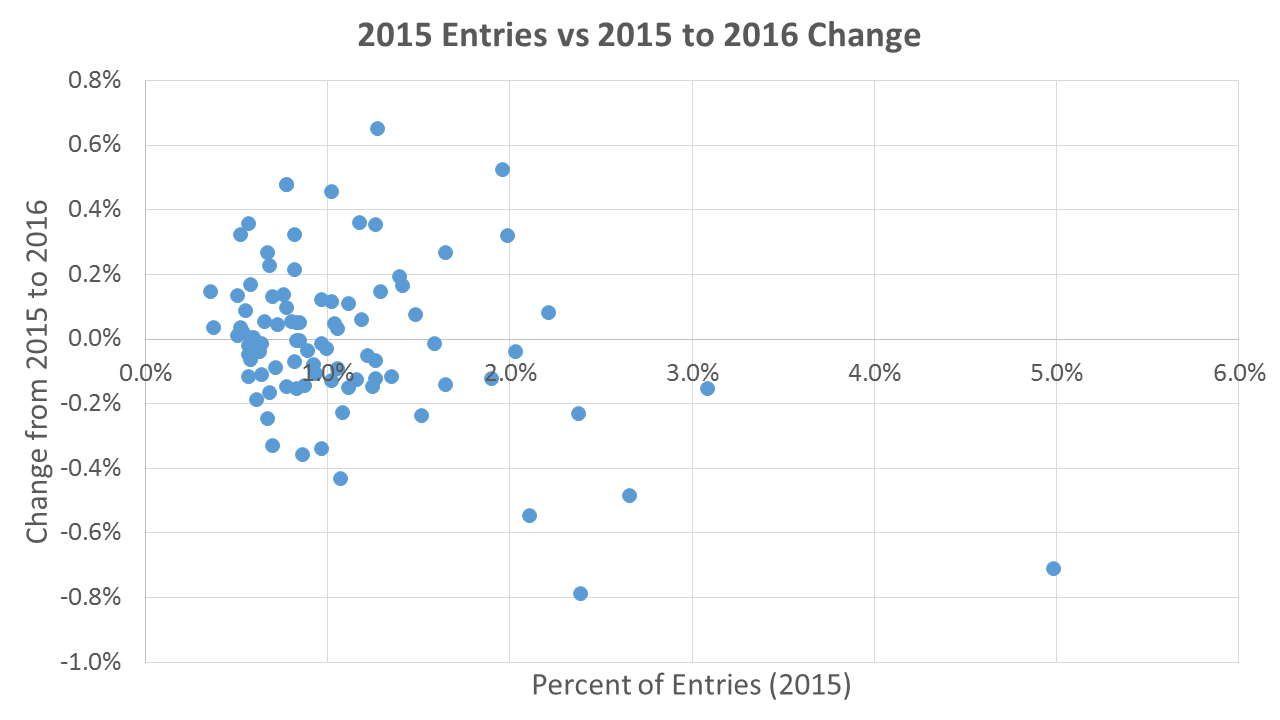 Congrats to all of the 2016 winners and best of luck getting a patented Charlie fist bump in 2017!