Breweries from all over the world are celebrating the results of the 2018 Australian International Beer Awards (AIBA), which were revealed last month. This year’s winners were honored at a prestigious awards pairing dinner curated by Brewers Association executive chef Adam Dulye in Melbourne, Australia.

U.S. brewers were recognized for more than 100 gold, silver, and bronze winning entries, in addition to several Champion and Major trophies. This year, AIBA attracted more than 2,100 entries from 350+ breweries in more than 30 countries.

The Brewers Association’s Export Development Program (EDP) facilitated the participation and consolidated shipment of 199 entries from 44 member breweries to the 2018 competition. In addition to the numerous gold, silver, and bronze awards won by U.S. brewers, the following EDP members and their beers were recognized as trophy winners in this year’s AIBA:

International competitions have long served as a platform for small and independent brewers to not only compete on a global scale, but to also create opportunities for increased brand recognition and familiarity when selling beer in international markets.

As Three Weavers Brewing Company brewmaster Alexandra Nowell explained, “We chose to participate in AIBA because it coincided with the launch of Three Weavers distribution in Australia during Good Beer Week in Melbourne. In the event that we did have some success at the awards, it would be a quick way to gain some industry recognition in addition to brand traction with accounts all over the country. However, AIBA is also extremely competitive, so I was naturally excited about the idea of putting Three Weavers beers up against the best of the best in Australia and beyond. I never enter competitions expecting to win, especially top honors, so it was humbling to take home both the Best IPA and Champion International Beer trophies for our beloved Knotty Double IPA.” 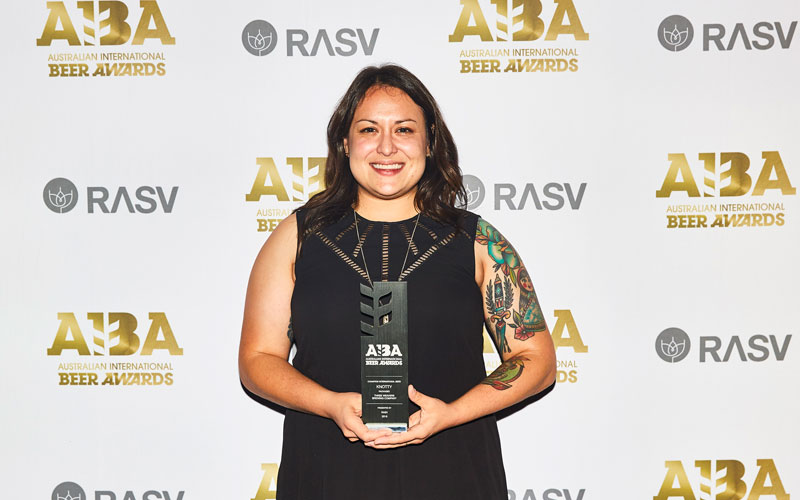 In other top honors, Firestone Walker Brewing Co. was awarded Champion Large International Brewery, which is awarded based on a brewery’s top four scoring beers. Firestone Walker brewmaster Matt Brynildson comments, “It is a true honor to see Firestone Walker’s beers perform well amongst so many world class breweries in the 2018 Australian International Beer Awards. We are thrilled to have been awarded a Champion Trophy this year. I just finished up a trip to Sydney, where I was asked to judge the Australian Indie Awards and during this trip I was blown away by the quality of the beers being brewed in Australia and how far the craft brewing scene has come in recent years. Considering the quality of the beers in the local field, it means even more to have been recognized by the AIBA judges. Firestone Lager is a new beer that was just released in January of 2018 and this was the first time the beer was entered in a competition. It was absolutely thrilling for the brew staff and me to learn that the beer did so well on its maiden voyage abroad. On behalf of the Firestone Walker team, we thank the judges and organizers of the AIBA for continuing to support better beer and for offering up this world class competition.”

The AIBA, now in its 26th year, is the world’s largest annual beer competition judging both draught and packaged beer, and provides breweries from around the world with an opportunity to compete on an international stage regardless of size: from boutique small volume operations to large-scale commercial production.

Congratulations to all the BA Export Development Program members who won awards at this year’s AIBA. For a detailed list of winners, please visit the AIBA Results Page.

The EDP, which generates exposure for American craft beer through trade shows, festivals, seminars, media outreach, and competitions, among other activities, was initiated in 2004 with funds from the United States Department of Agriculture Market Access Program (USDA MAP). The EDP includes approximately 100 small and independent brewers exporting their beers from the U.S.

Steve is Export Development Program manager at the Brewers Association. In his role, Steve educates international trade and media about the quality and diversity of products offered by the American craft brewers and helps member breweries grow their business in international markets. Prior to his role as EDP manager, Steve spent six and a half years as the assistant director of the American Homebrewers Association helping small & independent brewers and homebrew retailers expand their reach among homebrewers. He lives in Boulder, Colo., where he is a homebrewer, Certified BJCP beer judge, and Advanced Cicerone®.