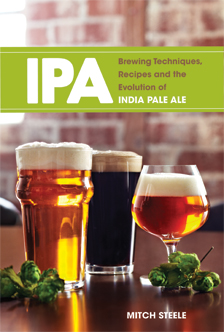 Boulder, CO • September 6, 2012—India pale ale (IPA) has become one of the most popular craft beer styles in the world, and Brewers Publications is pleased to present the authoritative guide to the brewing techniques and history behind this iconic beer. IPA: Brewing Techniques, Recipes and the Evolution of India Pale Ale, by Mitch Steele, is a must-have addition to any brewer’s library.

Arguably one of the leading authorities on hoppy beer, Steele is currently Stone Brewing Co.’s brewmaster, and his brewery experience ranges from the small-scale San Andreas Brewing Co. to the Anheuser-Busch specialty group. In this new book, he explores the evolution of an influential beer style, India pale ale. IPA covers techniques ranging from water treatment to hopping procedures, including 48 recipes ranging from historical brews to recipes for the most popular contemporary IPAs made by craft brewers such as Deschutes Brewery, Dogfish Head Craft Brewery, Firestone Walker Brewing Company, Pizza Port Brewing and Russian River Brewing Company.

In addition to brewing techniques and recipes, Steele also explores the real history of IPA. Matt Brynildson, of Firestone Walker Brewing Company, explains: “Mitch has [written] an engaging and eye-opening history of IPA blended with immensely technical brewing information. He not only debunks the classic story of what the first IPAs really were and how they were made, but also chronicles the tragic account of ale’s rise and fall over the last three centuries. This book should sit on every brewer’s bookshelf.”

Brewers Publications supports the mission of the Brewers Association by publishing over 50 titles of enduring value for amateur and professional brewers, as well as titles that promote understanding and appreciation of American craft beer.

The Brewers Association is the not-for-profit trade association dedicated to small and independent American brewers, their craft beers and the community of brewing enthusiasts. The Brewers Association (BA) represents more than 70 percent of the brewing industry, and its members make more than 99 percent of the beer brewed in the U.S. The BA organizes events including the World Beer Cup®, Great American Beer Festival®, Craft Brewers Conference and BrewExpo America®, SAVOR?: An American Craft Beer & Food Experience andAmerican Craft Beer Week. The BA publishes The New Brewer magazine and its Brewers Publications division is the largest publisher of contemporary and relevant brewing literature for today’s craft brewers and homebrewers.