Reps. Jim Gerlach (R-Pa.) and Richard E. Neal (D-Mass.) were recognized for their stewardship of the Small Brewer Reinvestment and Expanding Workforce Act (Small BREW Act). The awards were presented at a ceremony today in Washington, D.C., by Bob Pease, chief operating officer of the Brewers Association; Jim Koch, co-founder and chairman of Boston Beer Company; and Bill Covaleski, founder and brewmaster of Victory Brewing Company and president of the Brewers of Pennsylvania.

“The efforts of Congressmen Gerlach and Neal reflect their appreciation for America’s small brewers and the significant economic contributions that these men and women bring to the national economy,” said Pease. “We recognize both of these leaders for their commitment to creating a level playing field for small and independent brewers in their home states and across the country.” 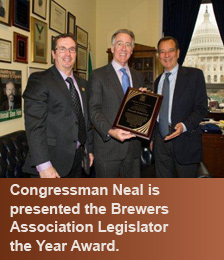 The Small BREW Act, introduced by Gerlach and Neal during the 112th Congress and expected to be reintroduced in February 2013, aims to recalibrate the federal excise tax rate structure to further foster the growth of America’s dynamic craft brewing community. Currently, brewers producing less than 2 million barrels of beer per year pay $7 per barrel on the first 60,000 barrels they brew, and $18 per barrel on every barrel thereafter. If the Small BREW Act is adopted, the rate for the smallest brewers and brewpubs would be $3.50 on the first 60,000 barrels. For production between 60,001 and 2 million barrels the rate would be $16.00 per barrel.  Any brewer that exceeds 2 million barrels (about 1 percent of the U.S. beer market) would begin paying the full $18 rate. Breweries with an annual production of 6 million barrels or less would qualify for these tax rates.

“Small brewers provide a significant economic spark, creating tens of thousands of jobs and generating tens of billions of dollars in economic activity each year in Pennsylvania and across America,” said Congressman Gerlach, co-chairman of the House Small Brewers Caucus. “These independent and innovative small business owners often work just as hard at improving their communities as they do perfecting their world-class products. It is a tremendous honor to be recognized by the Brewers Association for my bipartisan work in Congress to help small brewers remain competitive and continue building upon the success of America’s craft-brewing revolution.”

“I am honored that the Brewers Association has chosen me as one of their Legislators of the Year,” said Congressman Neal. “As someone who represents many small brewers in Massachusetts, this award has special meaning for me. Craft breweries are locally owned, generate economic development and create good jobs. They also make distinctive products for passionate consumers. As a supporter of the industry, I have introduced bipartisan legislation that would give small brewers a substantial tax break. My plan would recalibrate the beer excise tax for America’s craft brewers, allowing them to reinvest in their businesses. With the help of Brewers Association, I believe this initiative can be approved by the House of Representatives during this session of Congress.”

Nationally, small and independent brewers are bolstering the economy in a significant way. These small businesses employ over 100,000 full- and part-time employees and generate more than $3 billion in wages and benefits. They also pay more than $2.3 billion in business, personal and consumption taxes. In 1976, there were approximately 30 small brewers in the United States. Today, there are more than 2,000.

The Brewers Association is the not-for-profit trade association dedicated to small and independent American brewers, their craft beers and the community of brewing enthusiasts. The Brewers Association (BA) represents more than 70 percent of the brewing industry, and its members make more than 99 percent of the beer brewed in the U.S. The BA organizes events including the World Beer Cup®, Great American Beer Festival®, >Craft Brewers Conference and BrewExpo America®, SAVOR?: An American Craft Beer & Food Experience and American Craft Beer Week. The BA publishes The New Brewer magazine and its Brewers Publications division is the largest publisher of contemporary and relevant brewing literature for today’s craft brewers and homebrewers.

Cheers to a Great Year in Beer