Boulder, CO • April 10, 2012—Based on results from a recently-completed industry survey, the Brewers Association (BA) reports record exports of American craft beer in 2011, and for the ninth consecutive year*. American craft breweries exported over 110,000 barrels of beer in 2011, valued at an estimated $23.4 million-a dramatic increase of 86 percent by volume and 97 percent by dollars over 2010 exports.

Canada remained the industry’s largest export market, with shipments increasing 127 percent by volume (up to 27,976 barrels) in 2011, largely as a result of increased demand in British Columbia, Alberta, and Ontario. 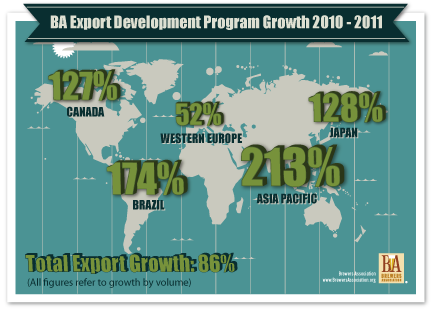 Additionally, the United Kingdom and Sweden remained the next two largest markets. Exports to both countries totaled approximately 13,065 barrels. Regionally, Western Europe is the largest destination for American craft beer exports. Shipments to the region increased by 52 percent in 2011 and now surpass 51,613 barrels.

“The growth in international sales is remarkable in light of the lingering global economic recession. Despite decreasing purchasing power, consumer demand for American craft beers has remained strong and importers have continued to expand their portfolios of American craft beer brands, even in emerging markets, like Brazil and India,” said Bob Pease, chief operating officer, Brewers Association. “These export figures speak for themselves. They are a testament to the innovation of small, independent American craft brewers and their focus on creating products of value to the consumer.”

Total American craft beer exports are up by approximately 500 percent since the BA Export Development Program was initiated in 2004 with funds from the United States Department of Agriculture Market Access Program (USDA MAP).

In the U.S., small and independent brewers employ nearly 100,000 full- and part-time employees, generate more than $3 billion in wages and benefits, and pay more than $2.3 billion in business, personal and consumption taxes. These brewers operate vital small businesses in communities across the country.

*representing all years for which data has been collected

The Brewers Association is the not-for-profit trade association dedicated to small and independent American brewers, their craft beers and the community of brewing enthusiasts. The Brewers Association (BA) represents more than 70 percent of the brewing industry, and its members make more than 99 percent of the beer brewed in the U.S. The BA organizes events including the World Beer Cup®, Great American Beer Festival®, Craft Brewers Conference and BrewExpo America®, SAVOR?: An American Craft Beer & Food Experience and American Craft Beer Week. The BA publishes The New Brewer magazine and its Brewers Publications division is the largest publisher of contemporary and relevant brewing literature for today’s craft brewers and homebrewers.