Where the Craft Breweries Are - Brewers Association
Skip to content

As the craft industry grows and changes – many of the most interesting questions revolve around geography. What regions lead the curve on craft? Which are catching up? Where should we expect more breweries to pop up?

With this post, I want to delve into breweries, geography and population to try and understand where craft breweries are located and where they might be going next. To do so, I’ve matched our brewery database (now over 3,100 active breweries!) with population data by zip code tabulation area (ZCTA) from the 2010 U.S. Census.

Let’s start with the basics. 52.9 million Americans, 17.1% of the 2010 U.S. population, now live in a ZCTA with a brewery. Looking in 21+ terms, that’s likely around 38 million Americans of legal drinking age (about 71.7% of the population is 21+). That’s astounding. In comparison, in 1873 (high point for American breweries), there were only ~42 million Americans, so it’s possible that more Americans now have a local brewery than at any point in history.

How do the areas where these breweries are located compare to the country as a whole? First (not surprisingly) they are located in more heavily populated areas (haven’t looked at density yet, but I’d assume the same holds). The average U.S. ZCTA is 9,371 people (median is 2,786) whereas the average ZCTA with a brewery has 23,035 people (median 21,009). That means tabulation areas with a brewery have on average more than twice as many people as the country as a whole. Here’s a graph showing the distribution of ZCTAs and brewery ZCTAs to really drive this home. 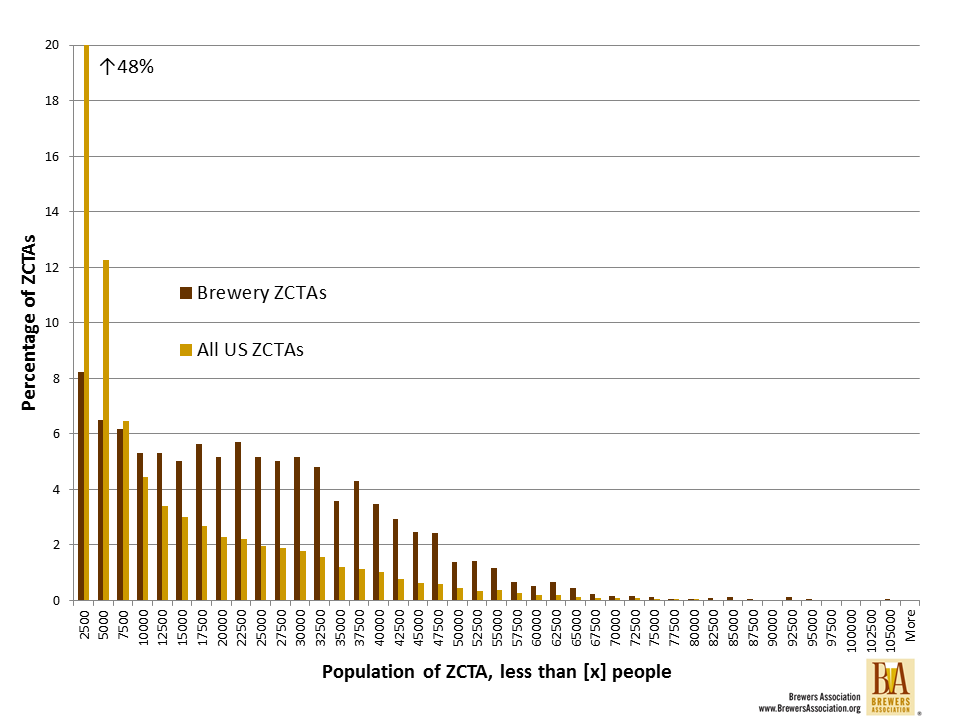 Whereas the vast majority of U.S. ZCTAs are very small (60% have less than 5,000 people), brewery ZCTAs continue to be fairly evenly distributed until about 30,000 people. 46% of brewery ZCTAs fall between 20,000 – 50,000 people. I’ll save you the advanced statistical analysis and just say that those are very different distributions.

One interesting sub-finding is that the ZCTAs containing microbreweries, regional breweries, and brewpubs look pretty similar. You could make a case based on the histogram below that regionals are located in slightly larger ZCTAs, but none of the brewery categories stand out looking at the descriptive statistics. I wonder if this will change in the future as regionals continue to grow and brewpubs/microbreweries continue to pop up in less heavily-populated areas. 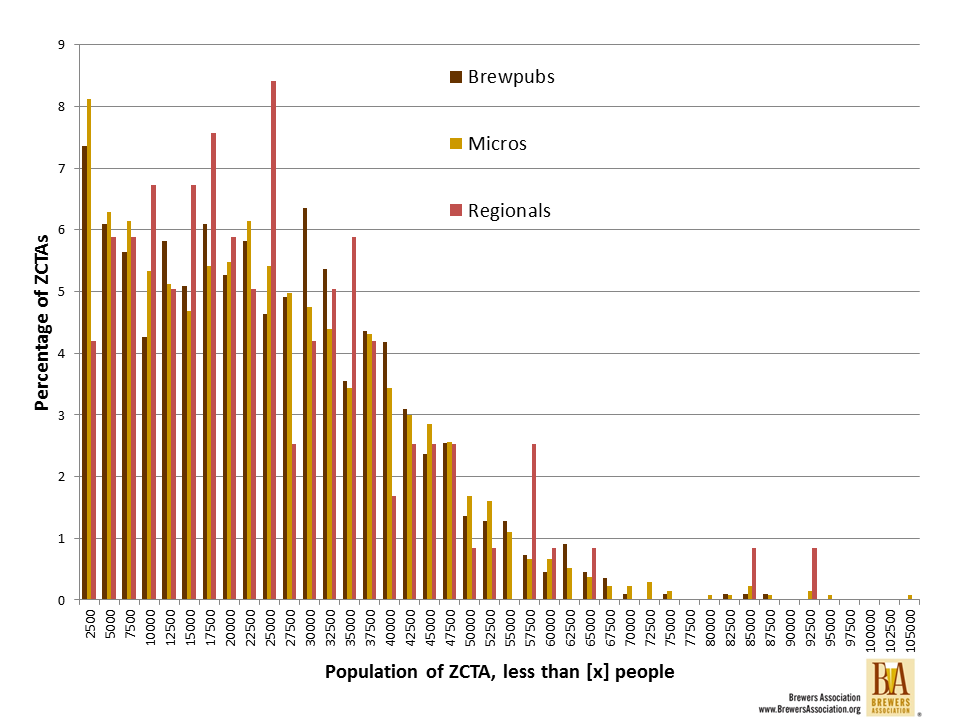 ZCTAs with a Brewery, by Category

So what does this all mean?

For one, I think it reinforces earlier arguments I’ve made that there is a lot of room to grow in the number of breweries. What percentage of Americans live in a ZCTA with a bar/beer-focused restaurant? While the percentage that live in one with a brewery will likely never climb that high – 17% suggests a lot of room to grow. The average ZCTA with a brewery has 23,035 people. There are still 3,815 ZCTAs in the U.S. that A) have larger populations than 23,035 and B) don’t have a brewery yet.

Secondly, it drives home just how diverse geographically the craft brewing movement has becoming. Long gone are the days where San Diego and Portland are hogging all the local breweries. There are 2,295 ZCTAs that now have a brewery. They range in size from over 100,000 people to 10 (10 ZCTAs with fewer than 100 people have a brewery). Americans, whether they live in urban or rural areas, large towns or small, are increasingly being exposed to beer produced by a local brewer. Let the local rumpus continue!