How Storytelling Can Help Your Brewery | Brewers Association
Skip to content

If you own a brewery, have you thought about your story: Who are you? What makes your brewery, your people, your story stand out?

No two breweries are alike. You might brew similar beers, or even collaborate with the brewery down the road—or even across the country—but the story about what makes you tick and how and why you choose to pour sweat equity into an independent brewery is different from everyone else’s.

During the Great American Beer Festival, CraftBeer.com invites a dozen brewery founders to sit down with beer fans for 30 minutes and tell us their stories. We call it Sit and Sip—and this year, the Sit & Sip sessions remain one of my favorite parts of the festival. You learn so much about the people behind the beer (and that’s exactly what we aim to do at CraftBeer.com). Mark Hasting from Uberbrew told us how his heart is in collaboration because he wants to surround himself with talented people so he can continue to learn. Branden and Chad Miller of Denver’s Black Shirt Brewing told us when they were kids, their dad told them to model their lives after the misfits wearing black shirts because, according to him, they were the workhorses—the people who didn’t do what the world told them to do.

Every Beer Tells a Story

I ask again, what’s your story?

Every time I interview a brewery, I look for what makes them stand out. Sure, your taproom is dog and family friendly, and you host yoga and comedy nights. Those are fabulous ways to invite the community into your space, but that’s not always what makes you stand out. Think about Eric Troutman, the brewer at Twenty-Six Acres in Concord, North Carolina, whose Unicorn Milk Cream Ale became a sensation—despite the fact that he tried resisting its popularity because it wasn’t “his thing.” Think about Chris Harris, the founder of Black Frog Brewing in Toledo, Ohio, who jumped through hoops with the state to get his original brewhouse (in his garage) licensed as a brewery. He was successful, and a few years later, he’s opened a brick and mortar spot while still keeping his regular nine-to-five job. Black Frog is his retirement plan.

Your Story Makes Your Brewery Stand Out

These are the stories behind the beer that connect with people—with your potential audience—on a relatable, personal level. What’s yours?

As CraftBeer.com’s Andy Sparhawk recently wrote, “Don’t just taste your beer, believe in it.” To me, that means believing in you—the people behind the beer—and that’s what you want to tell your customers.

Your “About Us” page on your website gives you a great start at making a personal connection with beer lovers, but go beyond that. Social media gives you so many ways to tell your story. Use Facebook Live to do story time and take questions. Instagram is a network where people share their passions, making it a perfect place for you to show off your people and your identity to a beer-loving crowd.

If you’re still stumped about how to tell your story, let us help. Write us at CraftBeer.com, and we’ll work with one of our authors to get out your story. Making that personal connection with customers and putting a face behind the beer will go a long way as you build your brand. 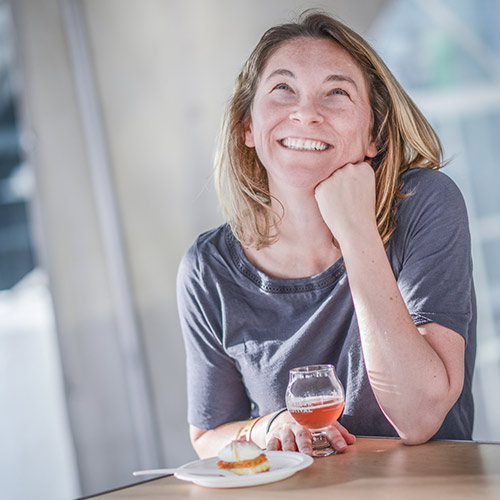 Jess Baker is the editor-in-chief of CraftBeer.com, the Brewers Association’s website for beer lovers. She’s dedicated to telling the stories behind the people and places who are the heartbeat of small and independent brewing in the U.S.