As brewpub brewers, we have lived to see our wildest dreams come true. We now have an audience that appreciates us for being more than a casual dining establishment. Our quest to educate the consumer on the merits of craft beer has paid off, and our patrons are significantly smarter in their buying choices.

But success comes with a price.

Where we may once have been the only darling local brewery on the block, now there are several with full retail applications. The beer consumer is pickier about what they drink and more demanding of quality and uniqueness. Coupled with a healthier economy, other restauranteurs are also figuring out the merits of offering craft beer at their establishments, adding to local competition for the craft consumer.

So I set out to query other successful brewpubs, asking: “What are your sources of competition in this new marketplace—restaurants or breweries? What are you doing to stay relevant and set your business apart in the eye of the consumer?” Here are some responses…

1. Do what you know works well

In Raleigh, N.C., there has been a recent proliferation of new breweries—but most have opted not to mess with food. That presented an opportunity for Boyland Bridge Brewing.

“If I had to pick, I would say I compete more with restaurants than breweries. We set our business apart by offering standard beers along with our food. People can always expect an identifiable beer profile in our products, not risky flavors,” says proprietor Andrew Leager. Boyland Bridge focuses on refinement of service to stand out. Apparently, being “normal” has come to be unusual.

2. Capitalize on your best features

Being a full-service restaurant allows Whetstone Station in Brattleboro, Vt., to compete with restaurants more than brewery neighbors that offer only snack food. The brewpub’s large, diverse menu maintains its competitive edge by taking advantage of those looking for a combination of good food and good beer.

In addition, Whetstone’s location on the waterfront clearly helps attract a wider audience than just beer adventurists, who might not be turned off by an industrial warehouse. This feature also sets the brewery apart from other retail locations.

An extensive and frequently changing craft beer list offers advantages on the beer side as well. Chief Bier Maker Tim Brady says Whetstone maintains a large guest draft selection, which keeps an edge on other craft beer bars. With only one flagship house beer, his other five options are all one-off batches, encouraging regulars and repeat customers to try new offerings on each visit.

At my own brewpub, Ladyface Ale Companie in Agoura Hills, Calif., our company culture has always been to educate the guest on craft beer and provide a brewery experience less commonly found in other restaurants. It sets us apart from the local competition and defines our daily actions. Prioritizing beer culture helps us provide a better quality of service to patrons, and increases our bottom line—both for the servers, and for the profitability of the company. 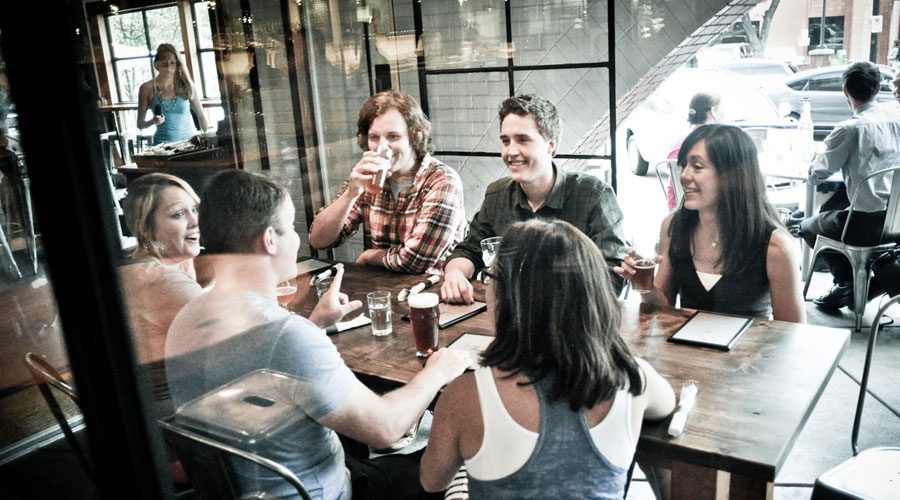 Brewpubs are a people business, and people are an asset. Telling the story of your brand through the waitstaff is paramount. Daily, direct access to the consumer allows a brewpub to stay in tune with how its brand is perceived. But be willing to embrace change and act on the information you get.

For a long time, Foothills Brewing was the only brewery in Winston-Salem, N.C. While that’s no longer the case, it’s still the biggest in the region. The spotlight has long been cast on Foothills’ award-winning beers, tending to overshadow the food at the pub, so its competition is for relevancy as a restaurant.

Foothills’ marketing guru, Ray Goodrich, feels obligated to provide both a genuine brand voice and a meaningful engagement experience for smart, tech-savvy consumers. “Anything less risks being labeled as contrived or overly ambitious salesmanship—both of which are a big turnoff to today’s customers,” Goodrich says. “That voice is reflected on our social media channels and website.”

Portland, Maine, is exploding with breweries and restaurants and is constantly rated as one of the best food cities and beer destinations. Sebago Brewing Company operates four brewpubs and a production brewery within a 50-mile radius of the city, and co-founder Kai Adams confesses that each location offers its own unique set of challenges in the market.

At one location, Sebago is considered “the local option” in a sea of corporate chain restaurants. Downtown, comparisons are made relative to other boutique farm-to-table restaurants. Both locations are high-volume with a broad appeal. Even with fairly large menu selections, they still continue to change their menus; the draft beer selection is similar at all locations but still rotates with a 50/50 ratio of core to seasonal beers. Adams says that staying relevant is also about consistent quality in a clean restaurant with smiling staff.

In addition to pushing our food to match the same high standards we set for our beer, Ladyface has always focused on our servers’ beer and food knowledge as a standard offering for our guests. We forget that, at other restaurants, server education may not always be on the forefront of their business culture, even if they offer an attractive craft beer lineup at the taps.

Amidst the proliferation of shiny new craft beer places, brewpubs will always have it all—that magical combination of great beer and great food, rolled into one experience. Get it right, and guests will keep coming back again and again. Cheers to that!

As co-founder and general manager at Ladyface Ale Companie – Alehouse & Brasserie®, one of Cyrena Nouzille’s goals has been to nurture a sustainable craft beer culture in the greater Los Angeles area. She is active in many local events and a member of the L.A. Beer Week event committee. Cyrena serves on the Brewers Association board of directors and is chair of the brewpub committee.