Black-Owned Breweries: Collecting an Unfinished History at the Smithsonian

Theresa McCulla is the curator of the American Brewing History Initiative at Smithsonian’s National Museum of American History. The initiative, made possible through a donation from the Brewers Association, is the first national-scale, scholarly effort to collect the histories of homebrewing and craft beer in the 20th- and 21st-century United States.

The storage rooms and archives of the Smithsonian’s National Museum of American History hold treasures. Lots of them—more than 1.7 million objects and 22,000 linear feet of archival materials.

Among those treasures are hundreds of vessels that Americans have filled with the nation’s favorite tipple: beer. Tankards, steins, bottles, pitchers, jugs, mugs, and cans: Americans of all eras have brought these to their lips for a sip (or two, or more) of beer. There is the beer can nursed by Archie Bunker on the TV show All in the Family. A souvenir Asahi lager beer can from Expo ’70, a world’s fair hosted in Osaka, Japan, in 1970. There are cans produced by Hamm’s, Coors, Rainier, Budweiser, Miller, Fallstaff, Ballantine, and many other breweries.

These brands fill Americans’ memories. These cans used to fill their fridges.

In fall 1970, Theodore “Ted” Mack led a group of African American entrepreneurs to purchase Peoples, based in Oshkosh, Wisconsin. Mack used his own savings, as well as funds from the federal government’s Small Business Administration. The group of collaborators was inspired by big goals: a quest for racial, economic, and cultural inclusion and equity, with beer as the catalyst.

“Mack’s desire to own a brewery stemmed from the idea that the Black community should become producers of the goods and services that it consumed—not just another market for white business interests to conquer,” writes historian John Harry. “He wanted a beer that Black people could call their own.”

For a variety of factors—racist responses from nearby consumers and purveyors; difficulties expanding into new markets; limited access to capital—Peoples closed in 1972. It had been a Black-owned brewery for just over two years.

Several months ago, Harry donated a Peoples Beer can to the National Museum of American History. It is a slender can, fitting comfortably in the palm. Nearly 50 years old, its gold, blue, and white design is still vibrant. On the can’s front, a diagonal arrow strikes the bullseye of a target. “Hits the Spot!” declares the logo near the top, where a beer drinker’s lips would have touched the can. “Brewed to please YOU!” appears near the can’s base. The “you” Mack envisioned was someone specific: the Black American beer lover—someone who, for decades, had been shut out of jobs in the industry, ignored by marketers, declined by investors, and disregarded by producers.

This particular Peoples Beer can has no base. It was never filled with beer. Harry suspects the can was produced in the brewery’s final weeks or months but production was halted before it could be filled. This seems a metaphor for the longer history of many Black-owned breweries in the United States. Americans of color were among the nation’s first brewers, yet the path to helming, owning, and profiting from breweries has been, and continues to be, fraught with barriers. The history of Black-owned American breweries is an unfinished history and one deserving of research, collection, and study by the Smithsonian and other institutions.

On a rainy morning in March 2021, I scheduled a visit to the American History Museum, which was closed to visitors and restricted to most staff due to COVID-19 safety measures. The hallways were quiet and most exhibition galleries dark. I transported the Peoples beer can—nestled in paper, in a custom-made storage box built by a collections expert—on a wheeled cart from the storage room of the Division of Work & Industry into the cavernous freight elevator and down five stories to the museum’s photography studio.

Double-masked, distanced from the masked photographer, I sat off to the side in the darkened studio and watched as the Peoples can took center stage. The object was tiny against its white backdrop and below the large reflectors that seemed to look down at it curiously. The photographer trained his lens and the flashes popped, sparking the room with light. The can shone, ready to tell its story.

Springfield’s First Black-Owned Brewery: Looking to the Future from a Historical Crossroads

In late August 1619, a privateer ship called the White Lion landed in Point Comfort (now Fort Monroe) in the Hampton Roads region of coastal Virginia. The ship’s captain, John Colyn Jope, brought with him a cargo that would forever change the course of American history—two dozen African men and women, sold in exchange for food.

More than two centuries later, thousands of enslaved people of African descent risked their lives by entering the Underground Railroad—a network of escape routes and hiding places used by those fleeing southern slave states. Massachusetts was an important center of the anti-slavery movement in the 18th and 19th centuries. The city of Springfield, in particular, became an important stop on the Underground Railroad, home to more than two hundred free black residents by 1850, and a meeting place for abolitionists like Frederick Douglass and Sojourner Truth.

When Raymond Berry, Jr. founded White Lion Brewing Company in 2014, it became Springfield’s first beer brand. The fact that the city’s first brewery was also black-owned drew a direct line between the present and its past. The brewery’s location at 1500 Main Street, which it occupied in 2020 after six years of contract brewing and statewide self-distribution, is just a block from the former site of the Pynchon Street Methodist Church—a likely stop on the Underground Railroad according to Springfield’s Pan African Historical Museum.

“African folklore and storytelling by elders depict the White Lions as a mythical creature, a Messenger of God, the child of the sun,” says Berry. “The brewery is part of history’s evolution dating back over 400 years…When we tell our story it is a first for someone, that is why I love sharing a piece of history.”

Berry shares, “White Lions were seen as symbols of prosperity, pride, and the universal good humankind has to offer.” In keeping with all of these themes, the brewery strives to be active contributors to the Springfield community, to Massachusetts, and to the craft brewing industry at large. The team at White Lion is invested in creating a legacy. “Hopefully 10, 15, 20 years from now 1% increases significantly,” Berry adds, referencing the Brewers Association’s 2019 demographic benchmarks for the brewing industry that reported that less than 1% of U.S. breweries are black-owned, “and more black and brown people will find opportunity and help elevate the trade to new heights.”

Mourning and Making History in the Nation’s Capital

Historian Michael Stein of Lost Lagers ran into a common challenge when exploring Black history and the legacy of Washington, D.C. beer and brewing. One doesn’t have to go very far back before the histories of Black brewers and brewery workers go missing. That doesn’t mean those individuals didn’t have an important role in the District’s brewing history.

Stein points to an excerpt from the memoirs of Christian Heurich, the longest-serving brewer and brewery owner in the history of Washington, D.C., included in The Nation’s Capital Brewmaster. Heurich, who purchased the former site of Schnell’s Brewery, “noted that ‘Frank,’ described as an ‘aged colored man,’ did most of the work at the brewery for the original owner. He was kept on as deliveryman and porter: he remained ‘a faithful employee of mine until his death.'”

We take this time to acknowledge individuals like Frank, whose unrecognized contributions were a vital part of the history of brewing in Washington, D.C. and across the entire U.S.

I have had mixed feelings about Black History Month for as long as I can remember. This may be an unexpected sentiment coming from your Brewers Association’s new equity and inclusion partner. Consider, however, that this is also the sentiment of someone who has for decades watched organizations celebrate Black history for exactly 28 days and then promptly shelve those celebrations when March 1 arrived. Moreover, I am one of many professionals who have been asked annually to do pro-bono work to make these celebrations possible. It has been all too easy to become cynical about these transitory efforts.

The grassroots effort to set aside time to celebrate and preserve the significant people and events in the history of the African diaspora (that began in 1925 and is now a federally recognized observance) does not deserve my cynicism. It deserves time and consideration that extends beyond the month of February.

The results of the first installment of our Brewery Operations Benchmarking Survey made two important things crystal clear:

However, charging forward without looking back is folly. In order to move forward intelligently and authentically, we must reckon with the past. It’s time to take another look at the brewing community’s history, tell stories that have gone untold, and acknowledge the stories that cannot be recovered, having been lost to time and bigotry.

This year, we highlight the contributions of Black individuals and communities to beer and brewing history with the help of some of the industry’s most talented historians and storytellers, and shine a light on a number of those making history today. Watch the Brewers Association’s social media channels for these stories throughout 2021. We will update this post over the course of 2021 with images, profiles, and links where you can learn more. 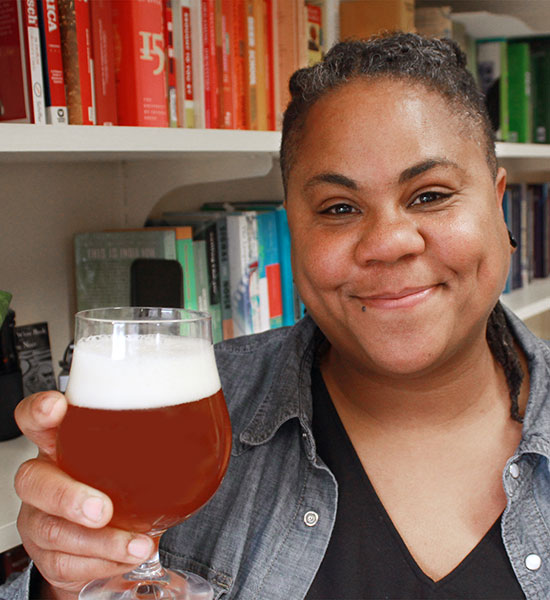 A former professor of Communication Studies, Dr. J Jackson-Beckham dedicated her academic career to the study of American beer. Today, she helps craft beverage organizations develop inclusive, equitable, and just practices that drive success, build communities, and empower individuals through her professional development platform, Crafted For All, LLC. She is also the founder and Executive Director of Craft x EDU (pronounced “craft by E-D-U”), a nonprofit whose mission is to champion equity, inclusion, and justice in the craft brewing community through education and professional development. She is an author, speaker, and vocal advocate for the craft beverage community. In 2018, Dr. J was named the Brewers Association's first ever Diversity Ambassador. Today, Jackson-Beckham leads the Brewers Association's Diversity, Equity & Inclusion (DEI) department as the association's Equity & Inclusion Partner.