Boulder, CO • February 9, 2016 – Dave Carpenter—an accomplished homebrewer and internationally published beer writer—has been named editor-in-chief of Zymurgy, the journal of the American Homebrewers Association (AHA). A long-time AHA member, Carpenter has been a contributor to Zymurgy magazine since 2012. He takes the reins from Jill Redding, who is transitioning to focus more on her role as editor-in-chief of The New Brewer, the journal of the AHA’s sister organization, the Brewers Association.

“With his impressive background in both homebrewing and writing, Dave has the perfect combination of skills, passion, experience and temperament to excel in his new role at the AHA,” said Gary Glass, director, American Homebrewers Association. “We welcome him further into the AHA community and know he will do an excellent job leading the premier magazine for homebrewers.” 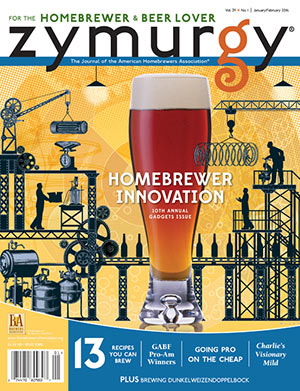 Carpenter served as a contributing editor to Craft Beer & Brewing magazine since the publication’s inaugural issue in spring 2014. His book, The Illustrated Guide to Homebrewing, is slated to be released in the coming year. He is also a BJCP Recognized beer judge and a Cicerone Program Certified Beer Server. He holds degrees from the Massachusetts Institute of Technology and University of Colorado at Boulder.

“As I zipped around the Colorado Convention Center reporting on the GABF Pro-Am competition for Zymurgy, I realized that I had become one of those annoyingly upbeat people who love what they do for a living. In my case, that’s telling stories about beer and the brewers who make it,” said Carpenter. “I relish the opportunity to keep telling the stories of this great community in Zymurgy. I thank Jill for giving me the chance to write for Zymurgy and am thrilled for all that’s ahead.”

“I relish the opportunity to keep telling the stories of this great community in Zymurgy.”

Since 1978, Zymurgy magazine has been the leading light for amateur brewers in North America and around the world. The magazine features innovative and award-winning recipes, articles on do-it-yourself projects, explanations of brewing science, and presentations of brewing techniques in addition to a healthy dose of beer culture. The May/June 2016 issue of Zymurgy will be the first under Carpenter’s leadership.