Sunday was November 1st, a day which marks a sharp shift in beer lover interest. Starting in August, interest in pumpkin beers, Märzen/Oktoberfests, and other fall seasonals builds to a fever pitch. This enthusiasm does wane a bit as October moves along, but generally remains robust through Halloween, the preeminent pumpkin holiday in our nation’s ever crowded holiday calendar (take that National Pumpkin Day).

Then November 1st happens, and interest drops. See the chart below for how sharp this drop is. It’s pretty steep (second only to the drop in interest for “Christmas Beers” after New Year’s). In IRI Group scan data, seasonals sell 11.6% of their volume in October and Märzen’s 9.5%. Those percentages drop to 9.3% and 8.3% respectively in November. So what fills the gap in demand when beer lovers slow their clamoring for pumpkin spice and malty goodness and before everyone craves holiday flavors? 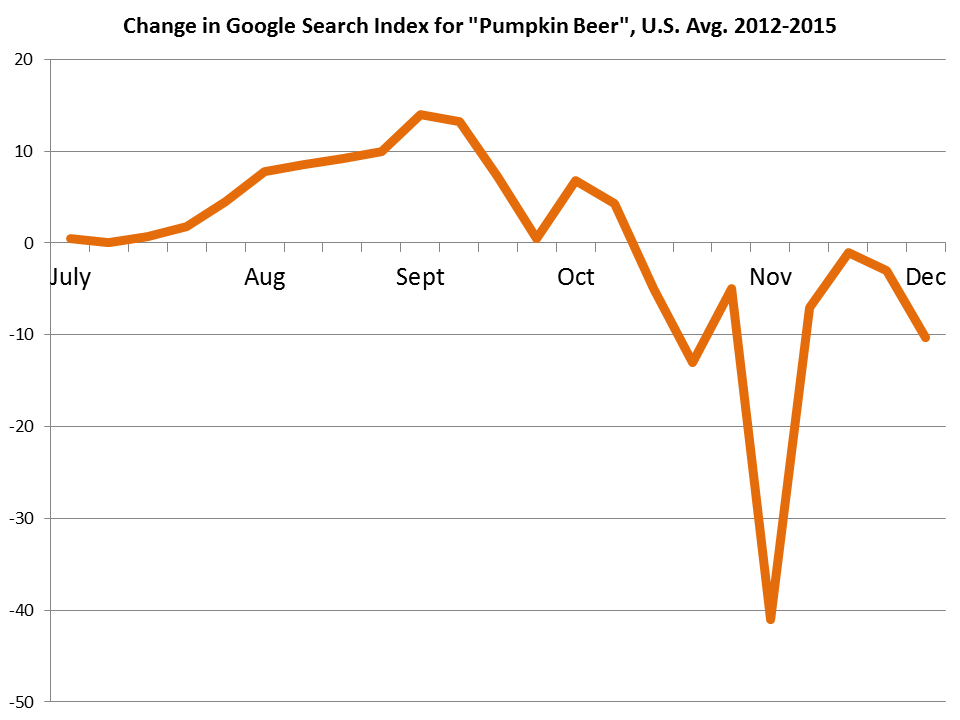 Normally the answer is ‘next seasonal up.’ But in this case, winter seasonals/Christmas beers really don’t seem to pique beer lover interest until post-Thanksgiving. Seasonal sales are at their highest in October and while they are still about average in November/December, are several points lower than their October highs.

That leaves November without a single, clear champion, and instead, a team effort emerges from a variety of styles. Some of these fit loosely in winter seasonal category, and others are more year-round styles that simply get a bump as the weather turns colder and the beers turn darker. These include Scottish ales, strong ales, amber lagers, and barleywines, all which see their sales share jump between October and November.  In addition, I want to briefly highlight two styles that really pop in November scan data/November Google searches:

In reviewing the last two years of IRI data, the category “Specialty Release, Specialty, Collaboration” really jumps off the page in November and December. In 2013-2014, the category sold 16% of its volume each of those two months, or third of its total volume in a two month period. That’s up over 4 percentage points from the 12% of volume in October. Unlike holiday beers, which really don’t pick up until December, specialty releases clearly start flying off the shelves in November. Some of this may have to do with timing of releases (breweries are likely well aware of the pumpkin to holiday beer gap), as well as the fact that many specialty releases are darker or barrel-aged that beer lovers start to crave as the weather turns colder.

Stout has been a stalwart of the beer industry for a while, and also a style that has seen strong growth in recent years (up 32.1% by volume YTD in IRI scan data, see the Q2 update for more). It is not a seasonal per se, with sales reasonably well distributed across the calendar. Interest in stout and subsequent sales start building as early as August, but there’s a noticeable jump come November 1st. The graph below shows Google searches for stout (beer category searches only as determined by Google). The jump between October and November is the largest of the year (and the November to December gap is very small). Note: some of the December to January drop is a results of a maturation trend. Because stout searches are growing, the end of the year is always going to be higher than the beginning of the year. December to January trends the following year do show a gap, but a much smaller gap). 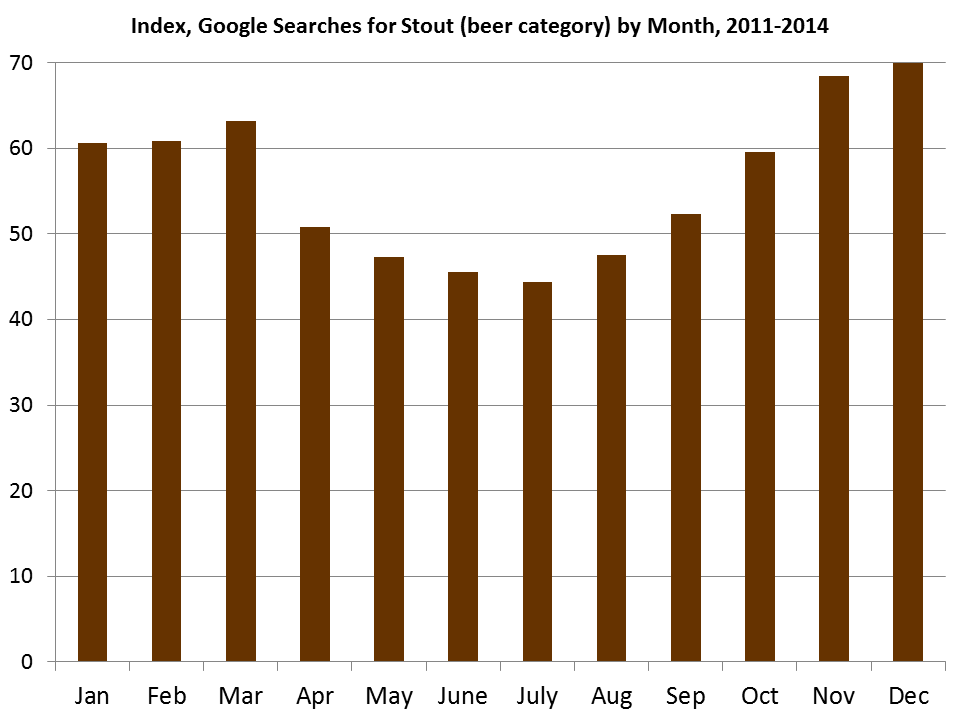 Looking at weekly numbers, almost all of this jump happens immediately as October turns to November. From 2011-2014, the last week in October had search volume with an average index of 58.5 and the first week in November has averaged 67.5. In other words, this isn’t just a slow build across the two months, but a sharp jump at the end of October that then stays relatively flat through November.

So brewers take heart. October has come and gone, but with that departure comes renewed interest and opportunities in the form of specialty releases, stouts, and more.

Note: IRI Group data represents a snapshot of the beer industry through off-premise scan data. As such, it may not be representative of overall craft sales, which draw more heavily than total beer sales from the on-premise as well as from direct brewery sales. That said, time-series comparisons such as those presented here are likely to be a good representation of changes in sales levels, even if the absolute levels they show may or may not be representative.