So despite my earlier efforts to dispel the notion that the number of breweries in this country represents some sort of bubble, “are we at the saturation point?” or “is this a beer bubble?” continues to be the most popular media question I field. While I’m a bit hurt that the mass media doesn’t read the blog, here goes round two in dispelling the notion that reaching 3,000 breweries means the country simply can’t take any more. It all stems from a simple concept:

MOST BREWERIES ARE SMALL AND LOCALLY FOCUSED

How small you ask?

Well, let’s look at some early state data from 2014. Here’s a histogram (a graph that shows frequencies) of California and Oregon craft breweries for the 1st quarter of 2014 (both states provide excellent data). Given that CA and OR represent about 20% of the breweries in the country, we’re also talking about a pretty good sample (albeit one that is probably biased). 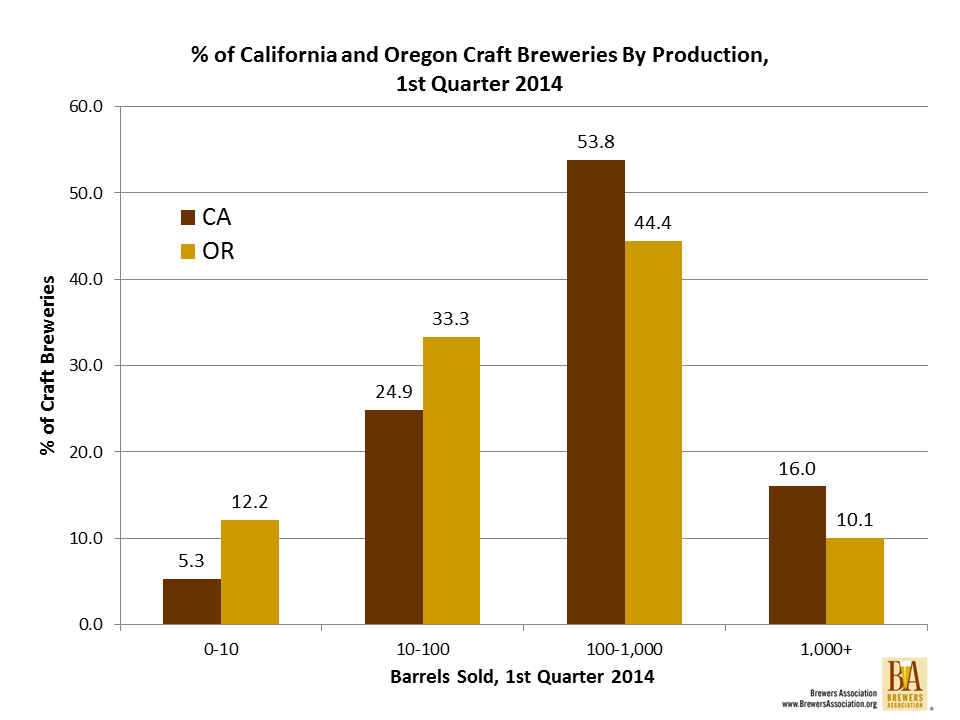 or about 4% of the current US beer market

Now I’m not saying that we will reach 5,000 or 10,000 breweries. Rather, I’m pointing out (once again) that with so many small breweries, analysts should focus much less on the number of breweries and more on other factors, like how much they produce or what their local market looks like. So the next time you find yourself asking “have we reached a saturation point of [x]?”, rather than breweries, insert “great bars that makes their own beer” or “neighborhood restaurants that have a killer in-house beer selections” into the sentence and see what you think. Breweries will come and go based on the quality and differentiation of their beer, business decisions and local market conditions, but the upward trend of small and independent breweries is here to stay.