Since American beer lovers apparently can’t get enough hops (IPAs are up another 42% YTD in scan data), one of the most interesting semiannual reports is the hop acreage report from the U.S. Department of Agriculture’s National Agricultural Statistics Service (USDA-NASS). As usual, the new one has a number of interesting nuggets. It is worth noting the NASS report only covers the Pacific Northwest region (WA, OR, ID) and so doesn’t include the smaller but expanding hop growing regions elsewhere in the country.

The topline news is very good, showing a strong increase (16%) in acreage between the 2014 harvest and 2015 plantings, and a further shift toward the most in demand aroma varieties. As I’ve tried to stress whenever possible, the hop market (like any market) responds to demand gaps and subsequent prices. Shown below are the top 5 gainers and losers in acreage from 2014 to 2015:

What you see is not particularly surprising. The aroma varieties where supply was not meeting demand have increased sharply. In recent hop surveys, the Brewers Association (BA) has been asking members what varieties they would have purchased more of if they were available. All five of these hops are consistently at the top of the list. Last year Citra, Simcoe, Centennial, and Mosaic were four of the top six hops in terms of % of respondents reporting a shortfall (the other two being Amarillo and Cascade). These acreage increases are a great sign that dealers and growers are highly tuned in to brewer needs (albeit with a few year lag on new hot varieties). In all aroma acreage grew by a staggering 6,913 acres (+25.8%).

On the flip side, dual-purpose alpha varieties struggled as Summit, Super Galena, Columbus/Tomahawk/Zeus (CTZ), and Cluster all saw declines. Alpha acreage dropped by 1,350 acres (-11.5%). Assuming similar alpha and aroma yields as recent years, this year’s crop will be 77% aroma acres and an incredible 69% aroma pounds. To underline how big a shift that is, as recently as 2009, the U.S. crop was 69% alpha acres, and an even higher percentage of pounds. It’s unclear how far this trend will go. Germany continues to be the lower cost alpha provider to the world, so U.S. aroma acres keep marching upward. That trend is unlikely to reverse until the price gap between U.S. aroma and alpha narrows. If you need more evidence that these shifts are price driven, head over to the Lupulin Exchange and check out the spot market prices for hops that increased in acreage and hops that decreased (note that spot market prices may have little relation to contracted prices).

One that might be a head scratcher in the report is that Cascade acres only grew by a net of about 200 acres. The result is that CTZ remains the number one variety by pounds, whereas Cascade remains the number one variety by acreage. However, based on our surveying, craft demand for this year’s U.S. cascade crop will grow by around 265 acres, so that increase was more or less on target. 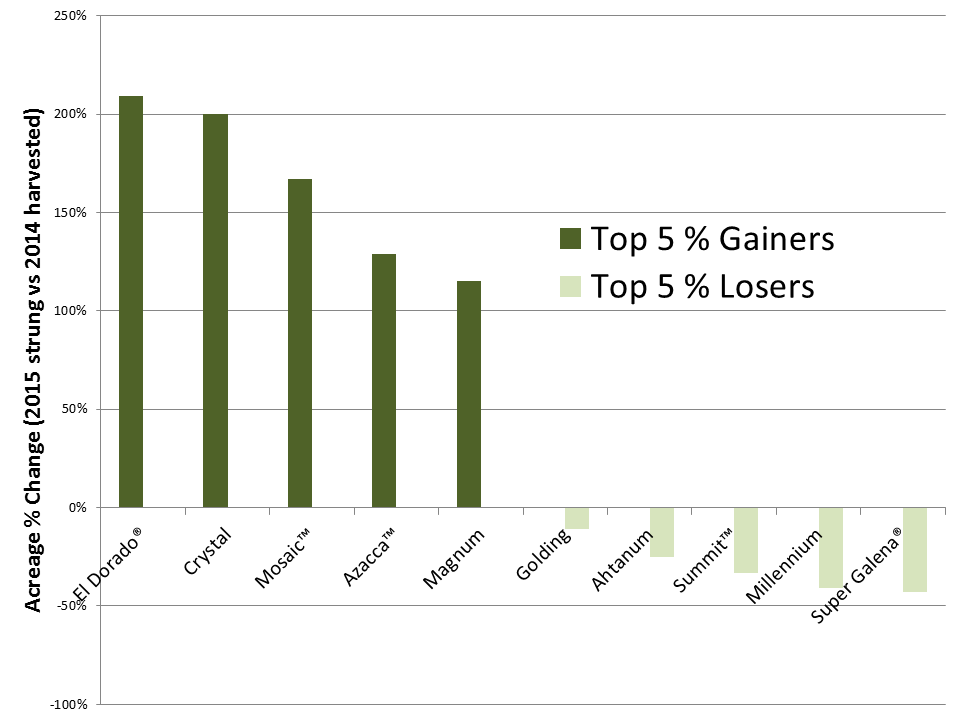 The offset to Cascade’s slowdown was huge growth in Centennial acres. Is it possible that brewers are beginning to shift future contracting away from Cascade (Centennial’s aroma is similar enough to Cascade that it is often referred to as “Super Cascade”) as a disease risk management move? If so, the shift to Centennial is still a bit odd, as Centennial is a tricky hop to grow with its own disease issues and relative climate fussiness.

The efficiency of these changes brings me to my penultimate point: don’t try to beat the market. I’ve been hearing some scary stories out there about brewers contracting well above their forecasted demand in the future, with the attitude that “even though I probably won’t need them, I’m sure I can sell them for a profit down the line”. Don’t be so sure of that. Historically, hops prices have been incredibly sensitive to demand. When there is a shortage, they tend to rise very quickly. On the flip side, when there is a surplus, prices can drop rapidly. This is why accurate contracting is so important for both sides (dealers and brewers). Contracting more than you need raises the specter of being the last one holding the hops when the music ends.

Finally, a few words about drought and climate change are in order. Although I would summarize the acreage numbers as exactly what brewers (collectively) wanted to see (though individual brewers may be various levels of pleased), the yield question is huge. A low yielding crop could easily swing a five million pound projected increase (over 2014) to a five million or – in worst case scenarios – ten million pound decrease. You don’t have to be an economist to guess what spot prices and future contracts would look like given that scenario. In addition, long term water issues could have devastating effects on the ability of new plantings to mature.

Some of these pressures may be mitigated down the line by hop growing regions outside the Pacific NW. Michigan has ~400 acres now and another ~400 being planted and strung. Other regions like the Northeast are also being expanded. Nevertheless, in the grand scheme, a few thousand acres here and there do very little in a hop market if the ~44,000 acres in WA, OR, and ID see serious shocks. In the longer run, there is more hope that new regions will lower systemic risk, but until new hop regions prove they can produce significant quantities of hops at the quality level of the Pacific NW as well as avoid disease pressures of their own (it’s pretty humid in Michigan…) those hopes are theoretical.

So raise your next IPA to our hop growing friends in the Pacific NW, and if you want to throw in a little rain dance, that would be fine too.