During the State of the Industry presentation at CBC, I presented some numbers on the general state of capacity in the craft brewing industry. Right now we estimate that there are roughly 34.6 million barrels of craft brewer capacity. Note that this based on self-reported capacity, and so the total number is a bit subjective based not only on different interpretations of “full” capacity, but also alternating proprietorships/contracts, infrastructure (packaging speed), style of beer, number of shifts, etc. As NBWA Chief Economist Lester Jones once quipped, “give me a light beer recipe and a canning line, and I’ll show you some capacity”.

That’s roughly 56% higher than production (22.2 million bbls) or flipped around, production is at 64% of capacity. That may seem like a big gap, but as I pointed out in my presentation:

1. Production is now greater than total craft brewer capacity in 2012

These points were meant to illustrate that the gap between production and capacity is perfectly appropriate and healthy in an industry that is growing year over year.

After the presentation, several brewers and breweries in planning asked some interesting questions about how that capacity is distributed and why if there is so much capacity people keep complaining about capacity constraints; so I decided to investigate further. I think you can sum my findings into three basic bullet points:

Let’s start with bullet 1. Here are two takes on production to capacity by size. The first is simply what was reported via BIPS. The second based on a linear regression model I created that tries to control for the fact that the breweries that reported their capacity might not be a representative sample. These don’t include capacity from contracting and alt-props, which are included in that total 34.6 million bbls.

All of this makes logical sense. As breweries increase in size, their growth rates slow and the capital outlays required to increase capacity go up, so you’d expect that ratio to drop. However, it does beg a question: the ratio for 0-5000 bbl group is pretty low – is that healthy for the industry and those breweries?

I think the answers here are yes and yes.

For the first part–is that ratio worrisome for the industry–it’s worth noting that breweries between 0-5,000 barrels only make up about 10-11% of total craft production, so even with a low production to capacity ratio, we’re talking about less than 6 million bbls of total capacity if you add them all up. So collectively, ~90% of the breweries in the country, more than 3,000 breweries put together, have less than half the capacity of a single MillerCoors facility in Golden, CO.

Secondly, these breweries are growing at a pretty tremendous rate. The data points mix together brewpubs and micros, but those categories grew at 20% and 33% collectively last year. Weighted for the size of the categories, that’s 29% (and it’s probably faster than that since 0-5,000 excludes larger micros). If we use the 0.4 ratio, at 29% growth you’d use up all your excess capacity in 3.6 years.

Next, let’s look at one of the categories in more depth. For this bullet, I’ve picked out the 5,001 to 15,000 barrel grouping, breweries that have clearly shifted into production and distribution mode.

Below is a histogram (frequency graph) of breweries in this category by their production to capacity ratio. 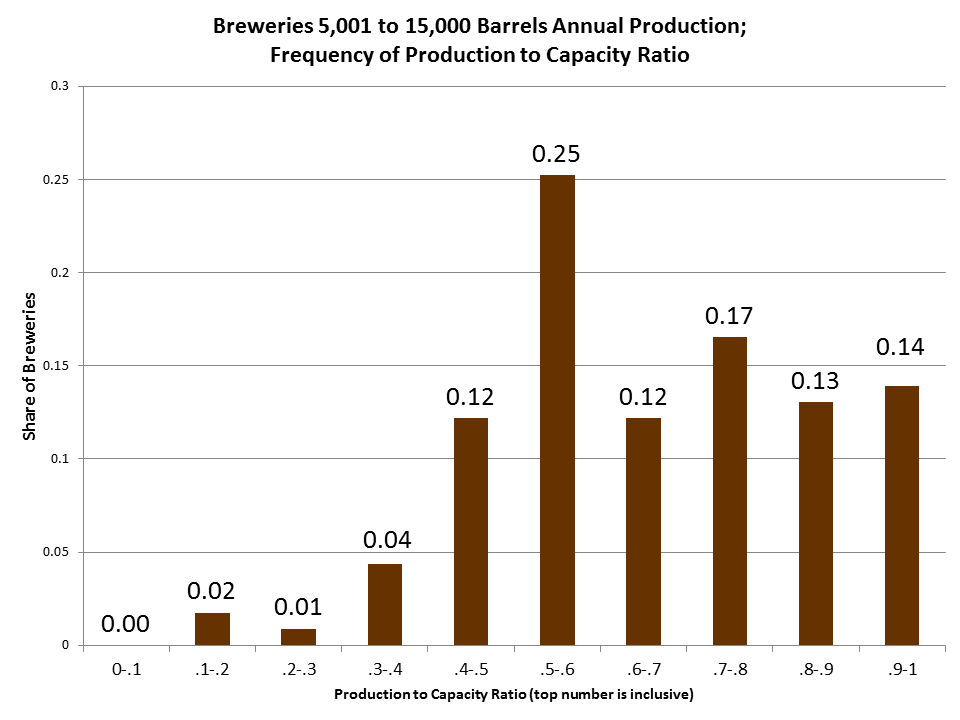 Although the average was only 0.6, 56% of breweries have a ratio that is higher than that. In addition, more than 1 out of 4 breweries in this range is running production at 80% of capacity or higher. That’s 25% growth for one year. No wonder we’re hearing so many stories about microbreweries being capacity constrained. What’s the wait time for stainless right now? You can see why breweries continue to investigate partner brewing models.

Even if there is 12 million+ barrels of capacity out there, it’s not evenly distributed. That’s not a bad thing–you’d expect capacity to vary by size and growth rates–but it does create particular challenges for many small, but growing breweries.

That leads me to bullet 3. Despite a million moving parts, it looks like the craft industry continues to be pretty saavy about capacity. A large percentage of the available excess capacity (~5M barrels) is held by breweries larger than 60,000 barrels. And in general, capacity in the industry can be fairly easily explained by a combination of growth rates and size. Here’s the first table re-worked around the growth rate that would be required for those breweries to completely use up their capacity in three years.

Growth Rate Needed to Use All Capacity in Three Years

Those rates don’t look outrageous to me. Now this doesn’t mean you should run out and put yourself on the waitlist for new tanks. What it does mean is that breweries are doing a good job of matching their capacity with forecasted growth. Problems arise when capacity decisions get out of whack with reasonable expectations. If you’re a brewpub betting on 50% compound growth for 5 straight years, that may be a problem. But what I take from this data is that brewers are realistically assessing their market prospects. Breweries up and down the barrel spectrum are working with their distributor partners and betting on reasonable growth expectations over the next few years. This will vary not only by size, but market, brand portfolio and more. As always, the national numbers provide great context, but knowing your brewery’s individual situation is infinitely more important and will set the basis for sustainable growth in the years to come.