Although beer analysts have been generally rosy about craft beer in recent years, underlying much of the praise has been a critique about volume. Not only have some questioned craft’s ability to drive volume, but craft has often been seen as a net drag on overall beer volume, sourcing its volume from “trading up,” where beer lovers drink fewer, but more flavor-forward beers.

Increasingly, however, I think the evidence points to craft being a net positive for the beer industry and suggests that craft beer is likely to be the key segment going forward in keeping the U.S. beer industry in the black. There are three main reasons for this.

The majority of craft’s growth now comes from craft beer lovers inserting craft beer into more occasions and from new craft beer lovers gained from other beverage categories. In the recent Brewers Association Power Hour, Danny Braeger from Nielsen presented data on where craft dollar volume is coming from these days. The majority wasn’t from the rest of the beer category, but rather from expansion of craft, including new buyers and increased volume from existing craft beer customers.

As I parse the data, I see this as craft lovers inserting beer from craft brewers into more occasions. One tangible sign is the ongoing strength of variety packs, which are designed to offer multiple brands for multiple occasions. Year to date, variety packs are outpacing the category, with volume growth of 21% and dollar sale growth of 24% (IRI Group, through 11-2-14). Another factor, which is harder to see in the scan data, is the rise of session beers. These lower ABV styles are allowing existing craft drinkers to increase volume while keeping static levels of alcohol consumption.

2. Many craft beer brands are starting to look like volume drivers.

Beer Marketer’s Insights recently noted that leading IPA brands are growing faster in 12-pack format than in 6-pack versions. Indeed, looking at top brands in IRI data, 6-packs held a 33% volume edge over 12-packs in 2013; that lead is down to 22% YTD. Looking more broadly at the IPA category, 2014 is on pace to be the first year in recent memory where volume share grows faster than dollar share, suggesting that many IPA brands are shifting toward higher volume (and therefore lower price/volume) formats.

3. Craft beer is on the front lines of competing for cross-drinkers.

Craft beer is on the front lines to turn these cross-drinkers into beer lovers. Part of the reason is that craft is boldly going where no beer has gone before, into places like fine restaurants. Look at the number of articles written this week about beer and food pairings for Thanksgiving. How many included craft beer in a space formerly reserved for wine? 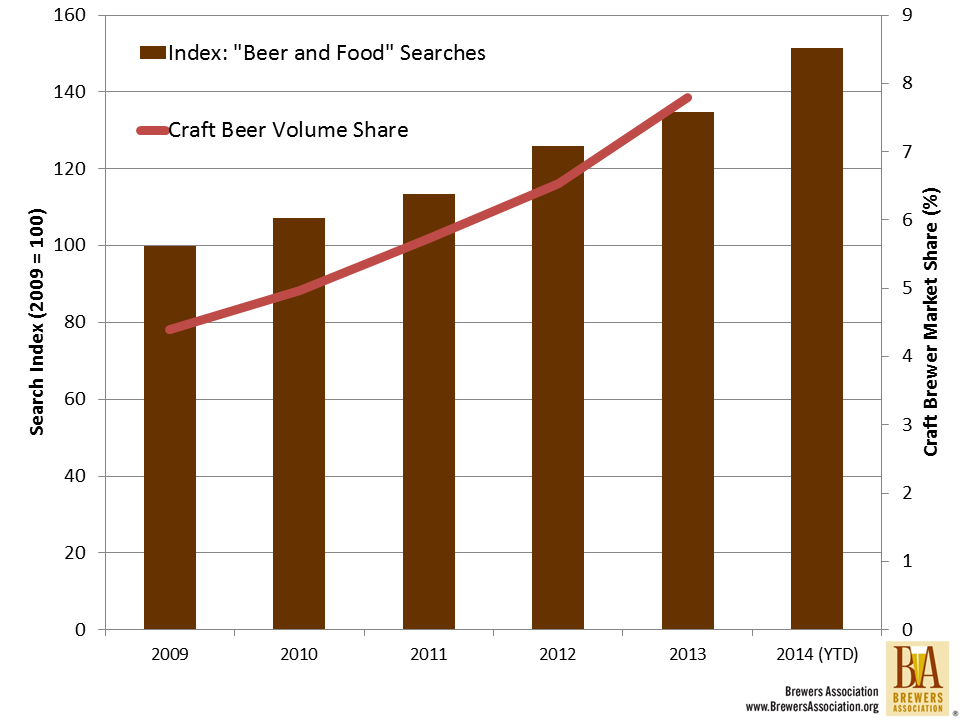 Note that craft’s ability to take occasions away from wine and spirits may be less true of other beer categories, which tend to source more exclusively from other beer. For instance, a recent Nielsen report suggests that Mexican imports source 86% of their volume from premium lights. That means that rather than competing for cross-drinkers, those beers are competing with other beer.

In all, these three factors suggest to me that craft beer now has a growth logic of its own, largely internal and in competition to other beverage categories, that will help drive overall beer volume in the coming years.

One critique of this argument will certainly be the omnipresent SKU efficiency curve. I’ve frequently seen this curve used to suggest that only a few craft brands are really volume drivers. However, one thing I’ve always hated about this line of reasoning is that it ignores the number of outlets selling a SKU. I personally think many craft brands are better volume drivers than many analysts realize once you take this into account, and that many brands that look small actually drive significant volume per outlet.

Think about where a New Glarus brand like Spotted Cow would fall on a national SKU efficiency curve. Now think about it again for a bar in Wisconsin. With more than 3,100 brands acting as volume drivers in their local markets, the craft category has the potential to aggregate local market power into national volume as craft drives beer volume in the future.