Craft brewery closings have been getting a bit more attention in the beer press recently. Although high visibility closings are worth noting, I think there are numerous reasons why the health of the craft brewing industry has never been better.

One of the most common data questions I get from breweries-in-planning is “what is the historical success rate of [brewpubs or production breweries]”. Normally the planning member wants this data for a business plan or — if they are further along — to show to a bank as they obtain credit for their new venture. Hopefully, they are also using the data to realistic assess the “should I really be doing this?” question.

Before going further, let me state unequivocally that I am in no way against new breweries opening, and I think and hope a lot more will open in the coming years. New breweries add innovation and vitality to the craft sector and craft wouldn’t be here without a group of people so passionate about brewing and selling great beer that they ignored the doubts and plunged headlong into this wonderful industry. In addition, I believe fervently that there are plenty of opportunities that still exist for breweries who can make a consistent, differentiated product, particularly at the local/neighborhood level.

Alright, caveats aside, the rest of this blog is going to soberly analyze what most of you hopefully already know: for a variety of reasons, lots of microbreweries and brewpubs close, and with the increased number of entrants into the industry, that number is probably going to rise a lot in the coming years. This is a sign of market competition, NOT a sign of problems in the craft beer market.

Here are the long term figures. Based on the 2013 data, 51.5% of the brewpubs and 76.0% of the microbreweries that have opened in the modern era (since 1980) are still open (so failure rates of 48.5% and 24.0% respectively). At first glance, this is a remarkable success story, far higher than rates for comparable industries/new businesses. One of the best studies I have seen on the restaurant industry found a 60% failure rate over a three-year period. These numbers also hint at the added complexity of running a brewpub, which essentially means running two businesses plus the synergies between them.

Nevertheless, some of this success – particularly on the micro side – is being inflated by the historic number of openings in recent years (1.2 new breweries opening a day over the last few years – closer to 1.5/day in 2014). So what happens if we look at lagged rates (i.e. compare openings a few years back to closings a few years down the road)? After sifting through the data, it appears that a 3 or 4 year lag works best with the data (4 worked slightly better with brewpubs and 3 with micros, but for comparability I’ve used 3 years for both). Let’s start with brewpubs. The chart below shows total brewpub openings vs total closings on a 3-year lag (so total openings in 2010 are compared with total closings in 2013). 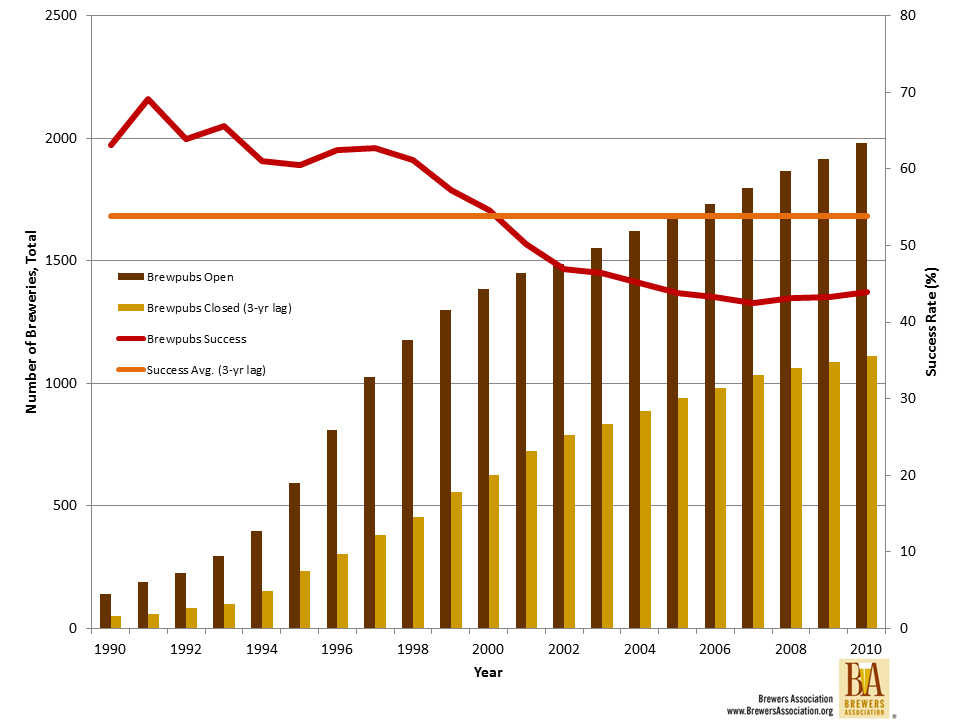 Let’s start with the basics: using this three-year lag period, the current lagged success rate of the brewpub category drops below 50%, to 43.9%, though the long-run annual average remains slightly above 50% (53.8%). (Note: don’t directly compare this with the Ohio State study linked above – these are very different methodologies covering different time periods). I say category, since this isn’t tracking individual breweries, but is looking at total openings versus that lagged closure figure (which may include breweries that opened during the lag and quickly closed). Given these figures, we’d expect roughly half the number of openings since 2010 (300 new brewpubs) in closings by 2015 (so ~150, maybe more if the success rate doesn’t move back up to that average), coming from both existing players and those new openings.

What about the micros? Interestingly, although the current three-year lagged success rate is still higher than brewpubs (57.5% versus 43.9%), the long-term average is virtually identical (53.5% vs 53.8%). 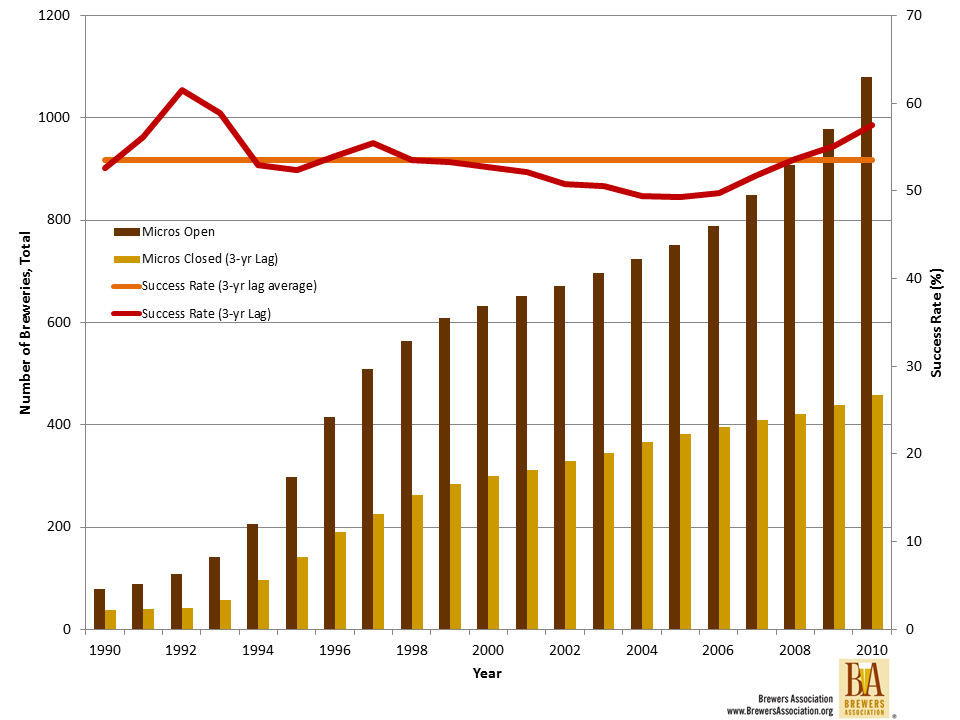 If we use the current success rate to think about future closures, the numbers are somewhat astounding. 836 breweries (that we know of) opened between 2010 and 2013. That means at a 57.5% three-year lagged success rate, you could use this to predict 356 micro closures by 2016. I am in no way predicting that this will occur (see below for why), but if it did, it wouldn’t be a sign of problems, it would simply be in line with long run averages.

Now, you might be saying to yourself, “but wait, today is so different than the past, why does it make any sense to compare micros opening today to those in the past?” Great question – glad you hypothetically asked it.

It might not make sense. One problem in looking at historical time series data like this is the possibility that underlying changes in the environment may mitigate our ability to make cross-temporal comparisons (i.e. today’s era is different so we can’t compare it to the past). What if we look at individual year opens and closings instead of this collective approach? First, let’s look at a scatterplot with microbrewery openings vs microbrewery closings three years later. 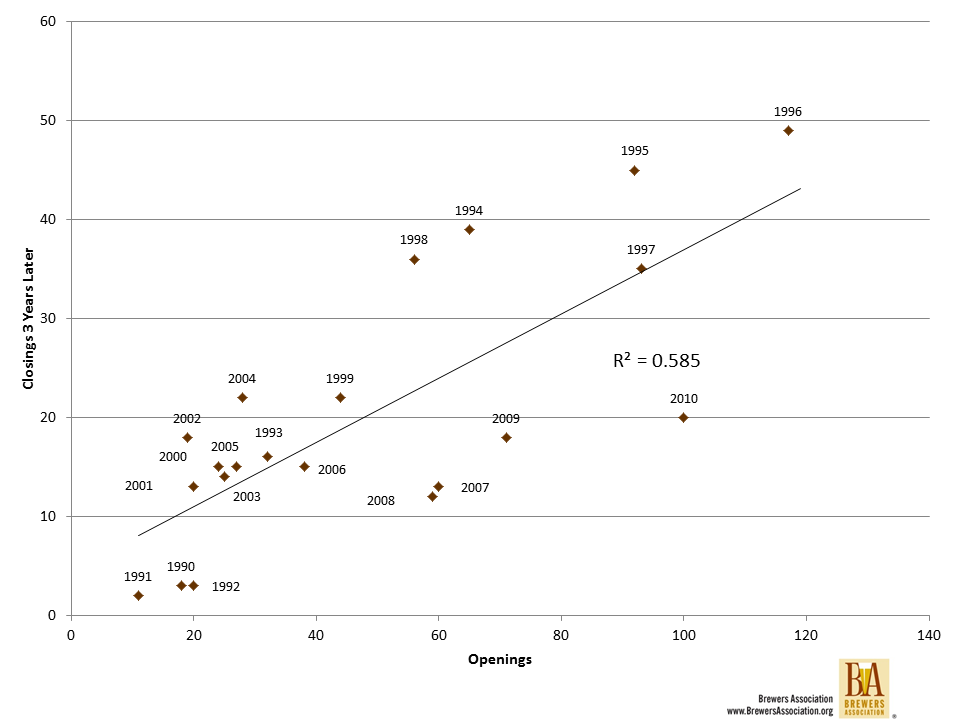 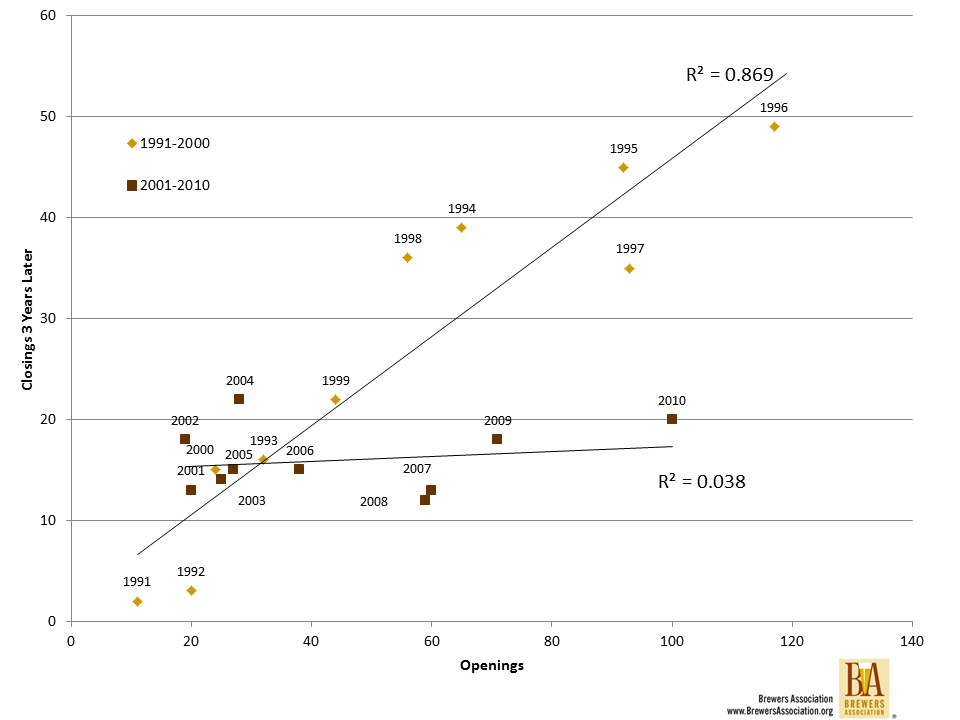 This suggests a couple of possibilities:

Scenario A. The new era of craft brewing is different and openings will no longer predict closings very well, this could be due to:

Which is it? As always, statistics are better at analyzing the past than they are at predicting the future, but I’d put my money on scenario A. Regardless, we are going to see an uptick in closings in the coming years. With 3,000 breweries, many of them competing in similar markets, more are going to close than when the U.S. only had 1,000 breweries, but this shouldn’t be a cause for alarm.

Openings continue to outpace closings (check out the latest U.S. Brewery Update if you don’t believe me), new breweries consistently find ways to produce innovative, differentiated products, and the American beer lover increasingly is demanding fuller-flavored offerings from small, independent, local producers. If that’s not a healthy industry, I don’t know what is.