Of all the state excise tax data sets, the California production data is perhaps the deepest and richest. Not only does it encompass more than 700 breweries, it also breaks out the production of those breweries by type (keg/case/tavern use/export), allowing us to draw insights into changes in the market, unlike many state data sources that simply track total production. I’ve written about this data before, most recently last year when the full annual data was released. The analysis below delves into the changes in brewery business models in 2017, separated by microbreweries/brewpubs and regional craft brewers.

Let’s start with breaking down some of the numbers by size and production. Here are average production levels by type for breweries of various sizes from 2016 and 2017.

There is a bit of a shift in the 5001-15,000 barrel category, but much of this may be due to the fact that the new breweries that moved up into this category have a slightly different (more draught heavy) model. Overall, we do see a bit more draught production, totaling about 70,000 more barrels across all brewery sizes. But, if I were to summarize the data in the table above, it’s generally a story of continuity rather than change.

What is changing are the brewery numbers. The number of breweries producing 1-15,000 barrels went from 631 in 2016 to 733 in 2017. That means that many of the macro changes we are seeing—for example, growth in taproom sales—are coming from the increased number of breweries more than a shift in the actual models of those breweries.

Put differently, here is a histogram showing the percentage of California brewpubs and microbreweries in 2014 and 2017, based on the percentage that tavern use (i.e., at-the-brewery sales) represents of their total production. Can you guess which is which? 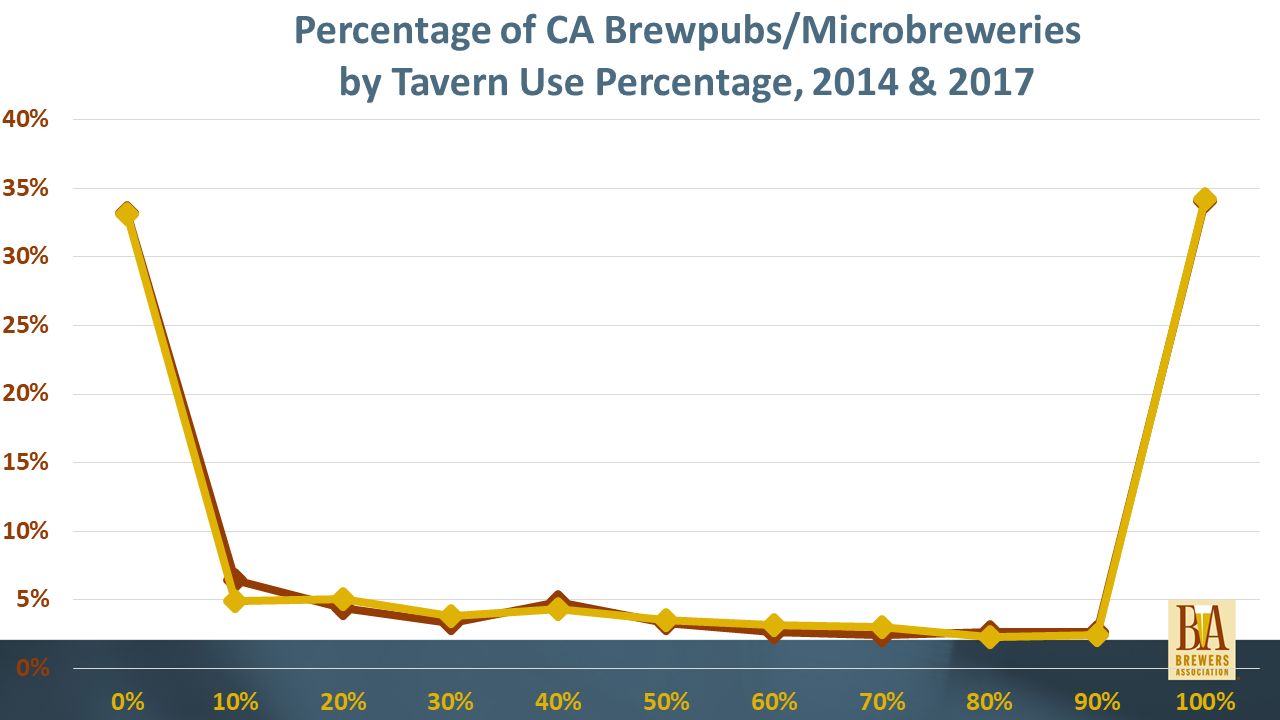 And here’s the same data, but this time in absolute numbers, rather than percentages. It should be pretty clear which is which now: 2014 in yellow and 2017 in red. So again, it’s not that business models are shifting to more onsite sales in California. There are just more breweries than there were before, meaning that even though the same percentage of breweries are selling a majority of their beer onsite, that’s a lot more breweries than it used to be. There are also 100 more production breweries selling 0% onsite! 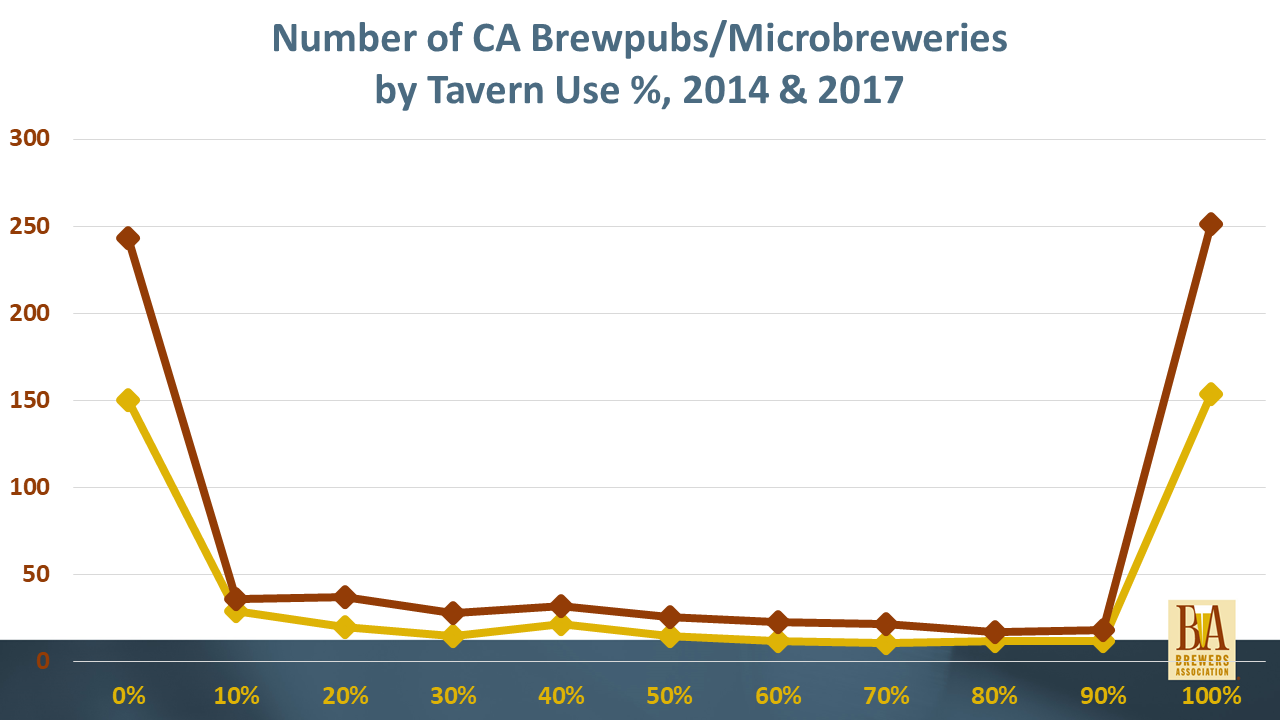 I also think the data in these two tables is another data point against the argument that “taprooms are stealing volume from on-premise,” at least how it is normally constructed. This set of breweries saw their keg production volume increase by 70,000 barrels, while tavern use sales increased by almost 30,000 and case sales increased by 20,000. Collectively, these breweries represent 77% of the “tavern use” production in California. So beer lovers are buying more of the same beer they are buying in tasting rooms out in the wider marketplace. If bars or other on-premise establishments are suffering, it is because of losses in volume from beers that aren’t being sold in tasting rooms and brewpubs, not because of what is being sold in them.

So given the tremendous growth in the number of microbreweries/brewpubs, how are California’s regional craft breweries faring? The answer is that it was a tough year, but not necessarily due to competition in California.

For this analysis, I isolated all the breweries over 15,000 barrels that weren’t a large AB-InBev/MillerCoors facility, and included only those that were counted as regionals in both 2016 and 2017. That left 21 small and independent breweries and another 7 regionals with ties to a large brewery or winery (E&J Gallo makes Bartles and James, a flavored malt beverage, in California).

Non-craft brewers show a similar pattern, though the geographic effect is weaker. This makes sense, since they likely have greater leverage with distributors further from home. Those brewers were collectively down -1.5% in California and -9.8% outside California. I’ll note that because some of these brands may be routing production through the large breweries owned by their parent companies – those numbers probably aren’t indicative of their total brand trends, just what is made at their branded breweries.

So California regional craft brewers are dealing fairly well with increasing competition in their home state, but are struggling further from home. Given the importance of local to many craft drinkers, this shouldn’t be that surprising, but the gap in trends might be larger than expected.

One other data point I found interesting was the trend by production type. From regional craft brewers, they were:

The much stronger case versus keg trend again suggests that the effect of changes to the on-premise environment—such as brewery taprooms or rotation nation—on regional craft brewers in distribution may be overstated. Yes, they are facing stiffer competition from the proliferation of microbreweries, but that is hitting off-premise as much, if not more, than it is on-premise. Unfortunately, there isn’t a way to break out keg/case by inside/outside of California, so we can’t evaluate the geographic differences by channel (Wisconsin does break this out, so that can be a topic for a future post). The export numbers are still small in absolute terms (that 38% is +6,000 barrels), but suggest even with slower craft national export numbers, opportunities remain abroad.

Over each of the last three years, California has seen 100+ breweries come online. Based on state data, what we see is that these breweries are largely mirroring the business models of the breweries that came before them. Nevertheless, the sheer number of new entrants is shifting the market, thus leading to increased competition, and forcing every brewery to re-think their place and relevance in their space. For regional craft brewers, they are experiencing similar explosions in the number of breweries and level of competition outside the state as well.