Much has been written about the rise of “own-premise” (i.e., at the brewery sales) over the past year. As seen from the TTB premises use number, own-premise sales have exploded in recent quarters. So how large have these sales gotten, and what trends can we pull out from the overall growth?

From our annual Beer Industry Production Survey, I now estimate that craft own-premise sales have increased to 2.3 million barrels, or approximately 9.4% of the production volume of small and independent brewers (9.5% of domestic sales volume). That’s about 1% of overall U.S. beer sales volume. Although that craft percentage is up more than 2 percentage points from last year, keep in mind that a half a percentage point of that increase is due to changes in the data set (acquired regionals exiting the set). The growth from last year’s estimate of 1.75 million barrels (550,000 barrels) is a bit below the increase seen in the TTB premises use number. The smaller growth may represent a) a slight overestimate last year, b) an underestimate this year, c) reporting differences year-to-year in the TTB numbers, d) a decline in packaged sales at the brewery, e) all of the above. A and B are always a risk given that this portion of our survey gets a lower response rate (and may have selection bias issues). The gap between the TTB’s 1.9 million barrels of premises use and our number reflects both volume that isn’t counted in premises use (packaged to go sales for instance) as well as a TTB number that will be revised upward (they’ve already done it once and it may happen again).

Alright, now that we’ve gotten the topline number out of the way, we can look more closely at breaking down the trends by factors like business model. Although most of the ink about own-premise sales gets spilled on microbrewery tasting rooms, it’s worth highlighting that these sales continue to be a far more important part of the business model of brewpubs. I estimated that brewpubs sold almost 960,000 barrels at the brewery in 2016, with brewpubs under 1,000 barrels selling 86% of their volume directly, versus 60% for brewpubs above 1,000 barrels.

Microbreweries actually sold slightly more absolute volume at their breweries than brewpubs (closer to a million barrels), but remember that the microbrewery category now produces 3.5 times the volume of the brewpub category, so microbreweries’ percentage of onsite volume was much lower than brewpubs (20% versus 71%). Put differently, the average micro is now selling about 300 barrels onsite out of 1,500 total barrels of production versus the average brewpub, which is selling about 500 barrels onsite out of 700 barrels of total production.

Looking within microbreweries, you can also see the progression I described last year–when microbreweries grow, they tend to shift business their business model toward distribution and away from their tasting rooms. Small, start-up micros sell a fair amount at their brewery. Microbreweries less than 1,000 barrels averaged 57% onsite in 2016–a very similar figure was seen from first year micros, who averaged 55% (also suggesting that microbreweries aren’t shifting toward more onsite–there are just more new ones). From 1,000-5,000 barrels, this drops to 21%. From 5,000-15,000, it’s down to 10% (for smaller regionals it’s 6%, and larger regionals less than 1%). 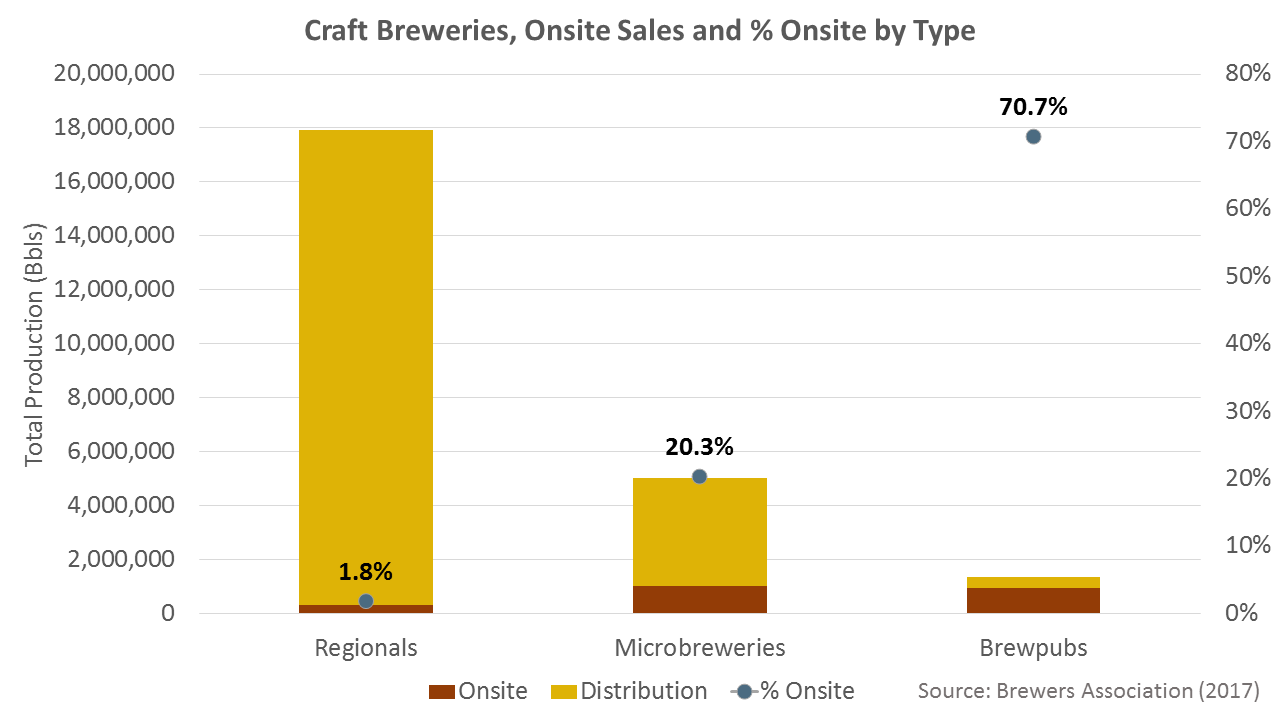 Further evidence that micros use tasting rooms as a base to grow their distribution, rather than growing through tasting rooms can be seen in the data from microbreweries that answered our survey in both 2015 and 2016 (sample size = 525, sample volume = 31.4% of total microbrewery data set; note: these breweries were a bit larger than the average micro, though that makes some sense since they can’t include any 2016 openings). Those breweries grew at 25% overall in 2016, with 88% of their growth coming outside the brewery, and only 12% of growth coming onsite. In absolute terms, they grew onsite sales by 70 barrels, but grew their distribution by more than 500 barrels. In addition, their onsite as a percent of production dropped by more than a percentage point, from 18.4% to 17.1%.

So to sum, that means that the category growth in onsite sales is coming more from the proliferation of breweries that begin with onsite as a large portion of their business model rather than a strong shift within existing breweries toward onsite sales. 70%+ of craft breweries are 1,000 barrels or less, and while they only represent 5% of craft production, with 65-70% of their sales occurring at the brewery, they account for almost 40% of craft’s onsite sales. Consumer demand will be the final arbiter of how many of these breweries can exist, but with over 7,700 TTB permits (of which 2,000+ are breweries in planning), it’s a fair bet that a lot of the current breweries-in-planning are eyeing this model.