I’ve written extensively about the importance of taprooms for many breweries’ business models. What I’ve never written before is how important they are becoming for overall craft growth. Through the first six months of the year, the TTB recorded 851,142 barrels of the total 87.8 million barrels of domestic production as “Tax Determined, Premises Use.” Although that’s still less than 1% of overall volume, it’s up sharply from 2015, when the TTB recorded only 525,203 barrels at the same point (see quarterly numbers in the graph below). That means premises use is on pace to add roughly 600,000 barrels of volume in 2016. And that likely underestimates growth. Because many brewers sell beer from their brewpubs or taprooms in kegs, I estimated that total at-the- brewery sales were 1.75 million barrels last year, versus 1.15 million in premises use recorded by the TTB. It will be hard to track the remaining 600,000 barrels until our year-end survey, but if the growth rate is anything like the premises, we could be looking at more like 900,000 barrels in incremental growth directly at breweries. 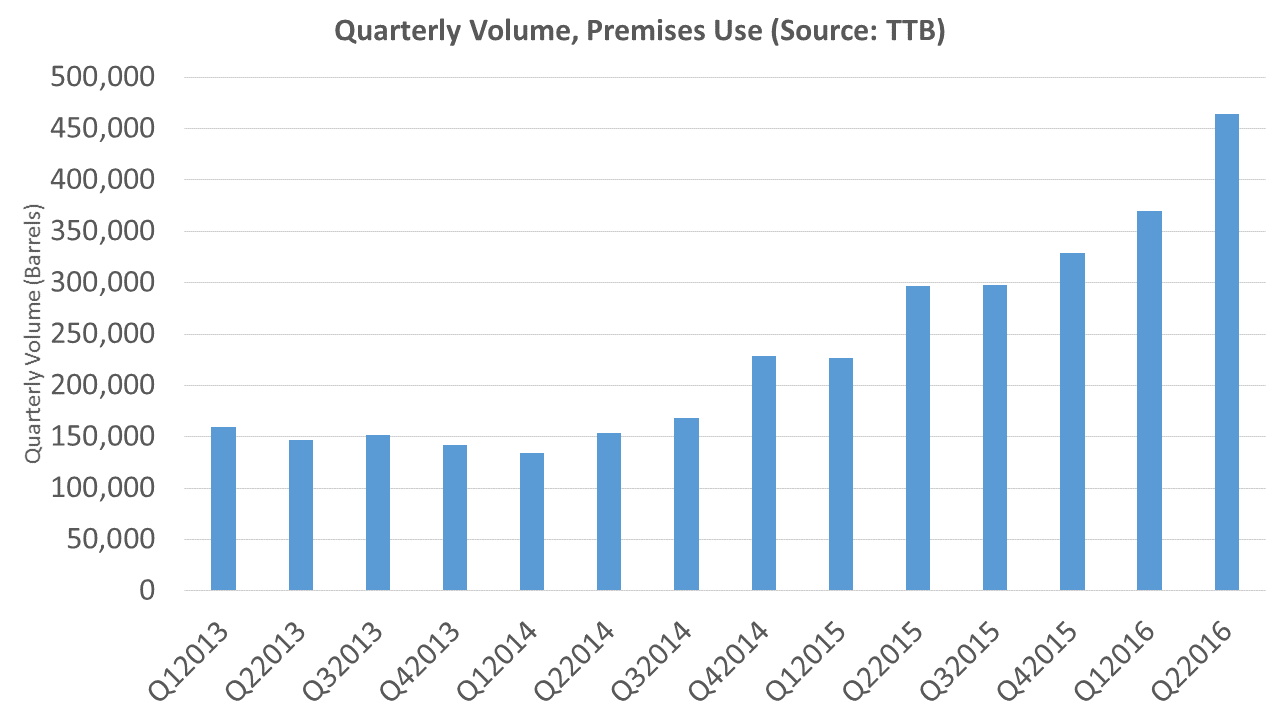 Even if we use the more conservative 600,000 barrels, an increase of that size would be somewhat shocking (note: some of that volume won’t come from craft brewers, but given that most of the barrels in “premises use” come from quarterly reporting – i.e. breweries producing fewer than 7,143 barrels – the vast majority will be included in the craft data set). Assuming that the mid-year 2016 estimate of 8% volume growth overall holds for the year, craft is on pace to add approximately 2 million barrels in 2016. Small and independent craft brewers are up 6.8% YTD by volume in IRI scan data (through 9/4/16). Assuming that’s correct for off-premise, that translates into about a million barrels of growth for off-premise for independent brewers. If recent patterns hold, another 100,000 barrels of growth will come from exports. Now, we’re deep into assumptions territory at this point, but that means it’s plausible that barrel growth at the brewery will exceed traditional on-premise (restaurant, taverns, bars, etc.) growth for craft: 2 M – 1 M – 600K – 100K = only 300K for other on-premise growth.

Maybe this should not be surprising. Some of the old ways of measuring chains on-premise have showed very slow growth in 2016. That said, the absolute amount of growth is quite high given that the percentage of on-premise volume that goes through breweries is still relatively small. The graph below shows premises-use as a percentage of keg+premises use production. This isn’t a perfect proxy for the percentage of on-premise volume for a couple of reasons. First, there are a lot of bottles and cans sold on-premise. Second, it doesn’t include imports. Finally, it doesn’t include kegs sold at breweries in the numerator. Given those caveats, I think at-the-brewery sales are probably closer to 7% of on-premise than they are to the 10% this graph shows (which would make them 25%+ of craft’s on-premise volume). But even as a minority of total volume, that much smaller brewery channel may now be adding more incremental volume for craft than much larger traditional on-premise channels. 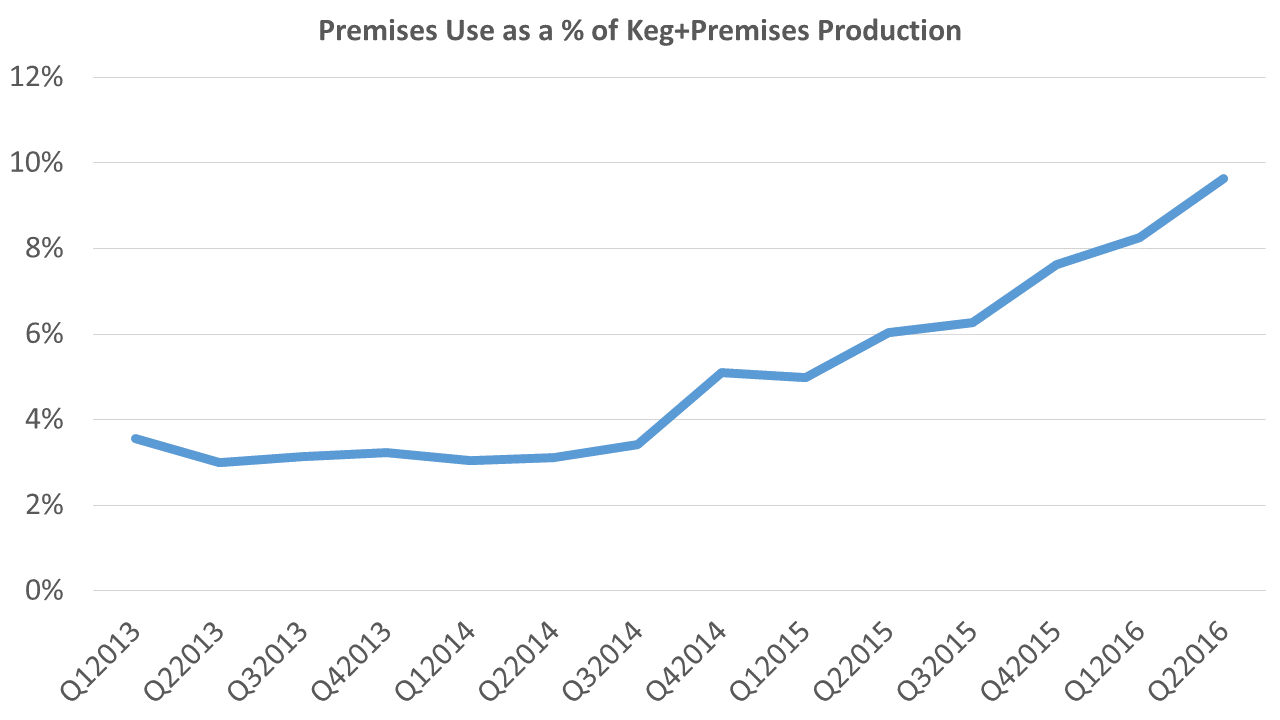 What does this mean for the broader industry? Let’s break it down by tier:

1. For brewers, it’s good news and bad news. The good news: taprooms, which with higher margins are a strong profit center, continue to show strong growth. The bad news: more traditional on-premise channels are showing much slower growth and in many states, brewers still have limited rights in relation to onsite sales. This increases the importance in those states for reforms.

2. For distributors, this suggests the need to work with brewers to translate beer lovers’ taproom enthusiasm into off-premise sales. The old maxim that “beer brands are built in the on-premise” may need an update. I view this as an opportunity for distributors; as more beer lovers visit breweries and connect with their brands, they’ll be looking for them in the wider marketplace. In our 2016 Nielsen Consumer Insights Panel (CIP), 60% of craft purchasers said they “purchased a lot/little more” of a brewer’s products after visiting their brewery. And, as seen in our annual survey, at-the-brewery sales typically decrease as a percentage of a brewer’s sales over time as brewers use that capital to expand into distribution.

3. Finally, for retailers, it suggests that some beer retailers will need to raise their game. We’ve increasingly seen retailers protest brewers’ retail privileges or even try to roll them back. I think that’s short-sighted. Yes, sometimes licensing practices need updating, but the tremendous growth in brewery premises sales are being driven by consumer demand, and in the American economy, the consumer eventually gets what they want. Rather than fight the trend, retailers should look at what’s working for brewpubs and taprooms and try to incorporate it into their businesses. Things like server training, the guarantee of cold storage and clean lines, and a diverse and unique beer list don’t have to be exclusive to breweries. Retailers that recognize the “why” rather than protesting will set themselves up for similar growth.

At-the-brewery sales will never be the majority of the beer business or even the craft business. What recent trends show, however, is that they are here to stay, and will be an increasingly important piece in the beer landscape in coming years. All tiers would be wise to study these changes and find ways to benefit.

END_OF_DOCUMENT_TOKEN_TO_BE_REPLACED

The Bucket Is Still Leaking – Why Isn’t Craft Growing More?