A Fistful of Hops - Brewers Association
Skip to content

The craft beer story du jour is about how America’s insatiable love of IPAs and the craft brewers who brew them is driving up the price of hops.

Now, I have no issue with the idea that craft is changing the US/global hops market. By some accounts, craft brewers now use 40-50% of all of the hops produced domestically. In addition, the shift in planted acres from alpha toward aroma has been a sight to see, and is certainly being driven by the rise in craft (which uses far higher levels of aroma hops). That said, I think the media may have been a wee bit hasty in putting the rise in hops prices solely at the feet of craft brewers.

The reason I say this is two-fold. First, the prices for hops are pretty much in line with the US crop sector generally (prices to growers, dealer markups may change this). The graph below shows an index of hops prices and the crop sector from 2000 to 2013 (USDA/NASS data, 2000=100). Since that point, hops prices have gone up 92%. General crop sector prices?  86%. Like all farmers, hop growers have to deal with rising energy prices, labor costs and other inputs.  Those input costs in turn get passed on to customers. 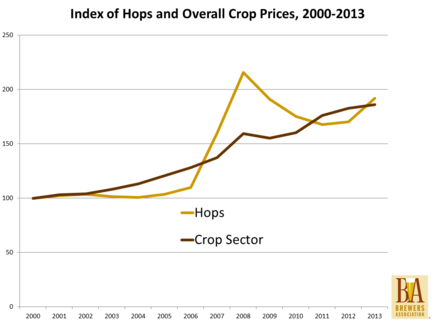 Secondly, hops are a global commodity. This means that American craft brewers are only one small part of a much larger global marketplace, which increasingly includes a lot of new brewers in other countries. Furthermore, the dynamics of the global hop market are exactly those which you would expect to drive up hops prices, with growing beer production (i.e. increased demand for hops) and decreased supply (data from Hop Growers of America, 2013). Increased demand + decreased supply = increased prices… that’s about as simple an economics problem as you’ll ever get. 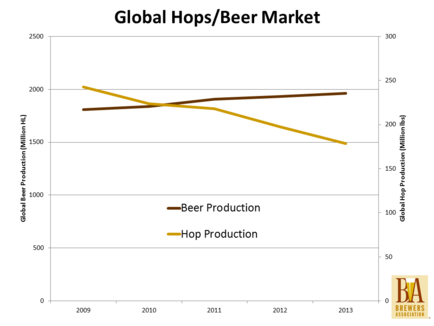 These trends are occurring at a time when US brewers are competing with a growing number of global brewers for US hops, which are increasingly popular outside the US.

If anything, there are several factors which suggest the rise in hops prices has been relatively modest. Some of these stem directly or indirectly from craft brewing. Some are simply changes in the industry. They all go beyond the simplistic, “people like IPAs”. They include:

In sum, the idea that US craft brewers are the sole cause of a rise in hop prices misses a few key facts:

END_OF_DOCUMENT_TOKEN_TO_BE_REPLACED

Together We Brew 2022: A U.S. and Mexico Craft Beer Collaboration