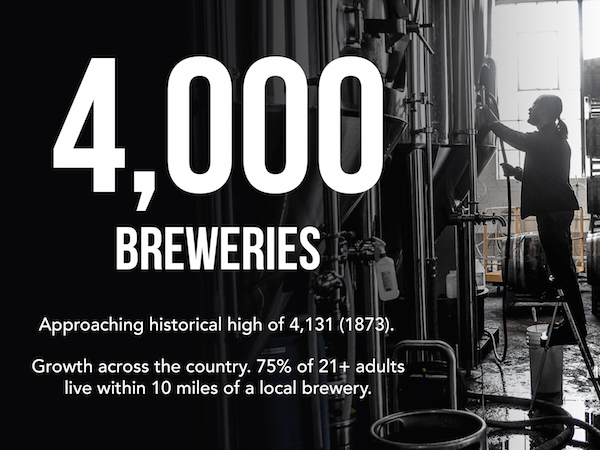 Much of the beer world’s attention in the past week was focused on the Great American Beer Festival. However, the week also brought another milestone in the resurgence of local American brewing, with the Brewers Association database passing 4,000 active breweries. Although precise numbers from the 19th century are difficult to confirm, this is almost certainly the first time the United States has crossed the 4,000 brewery barrier since the 1870s.

Van Wieren (1995) notes that the Internal Revenue Department counted 2,830 “ale and lager breweries in operation” in 1880, down from a high point of 4,131 in 1873. Given the strong pace of openings (approximately two openings/day with a net increase of 1.9/day factoring in closings), it is likely that later in 2015, or early in 2016, there will be more active breweries in the United States than at any point in our nation’s history. This is a remarkable achievement that would have been unthinkable in late 1970s, when the number of American breweries dipped below 100.

More recently, it seems only a short while ago that I was writing about passing the 3,000 brewery mark, and many of the same thoughts still apply: the continued return to a localization of beer production and the potential for future growth balanced by ever increasing competition and future challenges for breweries to differentiate themselves. I’ll also repeat what I said then:

What it does not mean is that we’ve reached a saturation point. Most of the new entrants continue to be small and local, operating in neighborhoods or towns. What it means to be a brewery is shifting, back toward an era when breweries were largely local, and operated as a neighborhood bar or restaurant.

How many neighborhoods in the country could still stand to gain from a high-quality brewpub or micro taproom? While a return to the per capita ratio of 1873 seems unlikely (that would mean more than 30,000 breweries), the resurgence of American brewing is far from over.

The past 15+ months have borne out that statement as the map of U.S. brewing has continued to diversify. There are now breweries in more than 2,000 unique cities across all 50 states. At the same time, there are also nearly 1,000 cities with a population of more than 10,000 that don’t have a local brewery yet, and numerous neighborhoods in larger cities without a local brewpub or taproom. As America’s beer culture continues to deepen and spread, there are still ample opportunities for well-differentiated, high-quality entrants. So, to all the hard-working brewers/brewery staff that have made 4,000 breweries a reality, and to the next wave of innovative entrants to follow, cheers!

The Brewers Association brewery count is based on the number of brewing facilities actively selling beer in the marketplace.  This requires having a Brewers Notice from TTB and paying federal excise taxes on beer. In addition, this count only includes brewing facilities that are not counted as someone else’s facility (to prevent double-counting). This means it does not count breweries in planning or alternating proprietorships, which may be included when only counting brewing licenses, nor does it count contract brewers, who do not have a Brewers Notice. Unlike the U.S. Census Bureau figures, which are based on NAICS codes (North American Industrial Classification System), it does count brewpubs and other breweries that engage in business activities beyond brewing, assuming they meet the criteria above.