You cannot afford to ignore social media. More than 1.79 billion people worldwide are on Facebook. More than 400 million on Instagram. We reach for our phones first thing in the morning and it’s the last screen we see before we close our eyes. This is your biggest opportunity to talk to your audience and make an impression. This is the way to get them in your brewery door or searching for a new release they saw online–and you don’t have to go broke doing it.

Before becoming editor-in-chief of CraftBeer.com, I was a senior editor at a top 20 U.S. digital media publisher. In 2013, I set out to discover what our social audience actually wanted from us–and there were absolutely surprises. Once we figured out what types of content worked best on Facebook, I spent the next few years growing our Facebook page by 300 percent (without spending a dime). We decided to essentially ditch Twitter: it wasn’t worth our time. We moved our manpower and doubled down on Facebook.

So how do you get the best out of each to benefit your brewery? What are some dos and don’ts? I’m going to attempt to boil a whole boatload of info into a few things you can start doing right now to make a difference.

Rule Above All Rules: Authenticity

Publishers–i.e. newspapers, digital properties, consumer brands–sometimes they have a bit of an identity crisis. Sometimes they all look the same. But you, dear brewery, already know who you are. You have built your business around values, around community and around people. Hold tightly to that story (that “brand” as the marketing peeps say) and make all of your social accounts an extension of you.

Facebook uses an algorithm based on thousands of factors, both man-made and computer generated, to decide who gets to see your posts. It’s important to realize that people who follow your page only see 1 out of 10 (sometimes fewer) of your posts; but the more engaged that individual is with your page, the more posts they’ll see.

Facebook live hits and native videos (meaning they are uploaded straight to Facebook, not linked off to YouTube or Vimeo) are generally going to be seen by more of your fans than a simple post or even an article. Use live shots and video to take your fans into parts of the brewing process they don’t get to see. Unveil new branding or new releases for the first time. Build suspense. Give ‘em drama. Going live and creating videos can sometimes take time, so if you’re low on manpower, sharing articles that feature your brewery and that reinforce your brewery’s values will give your page a boost as well.

Hashtags aren’t super useful on Facebook (it’s a different story on Instagram and Twitter). Also, avoid using words like “today” and posts that carry immediacy: Just because you hit publish on a post doesn’t mean fans are going to see it in the next few minutes or even the next few hours.

Instagram is the perfect venue to visually show off your brand and tell your story. Facebook owns Instagram and recently instituted an algorithm, which means people who follow you are no longer seeing your posts in chronological order–or your posts may not be surfacing as much as they used to.

Hashtags are your way to make sure your photos are surfacing to the people who are most likely to interact with your brewery. Go beyond the pretty beer and show the faces of the people who make your brewery possible. Unveiling new artwork or new releases to make your Instagram followers feel like VIPs.

Don’t exist only to accept engagement. Instagram gives you the opportunity to like photos your fans take of your taproom, your events and your beer. Use the Repost app to feature photos from your fans–they’ll be excited you acknowledged their post, and the community will grow. 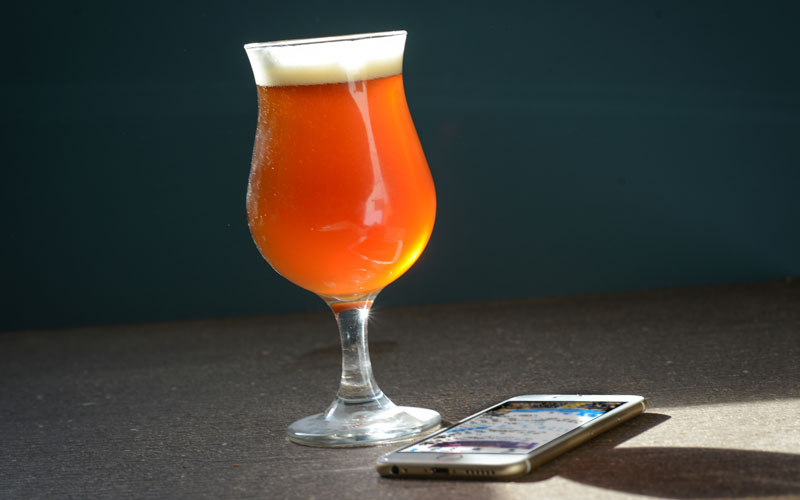 Twitter is best for capturing news and events in real time. Use it for taproom updates, event announcements, job postings and overall interacting with your fans. You generally aren’t fighting an algorithm like you are on Facebook and Twitter.

Discover hashtags that are important to your fans and add one (not seven) to your tweet. Your local fans, and even savvy beer travelers, set up Twitter streams based on these state and local hashtags (think: #gabeer, #cltbeer, #pdx). Create your own and use it consistently (think: #troegsway), and your fans will follow.

Twitter can suck you in because there’s so much to discover–but you don’t have to let it. Our Twitter motto at CraftBeer.com is, “Optimize our tweets and our time.” Set aside a few minutes every day to schedule your tweets (using a program like Hootsuite, Tweetdeck or even the new beta version of dashboard.twitter.com) and then move on.

CraftBeer.com contributor Shawndra Russell pulled away the curtain to reveal more tactics craft breweries are using to draw more eyes on social media. Check out her advice on Facebook and Instagram.

Social media can feel like a shifting target, and not every post you create is going to go over how you hope. But knowing how to use each platform’s strengths to your advantage can save you time and help you get your brewery’s values and story to the people you most want to capture.