Way back in 2017 when the Brewers Association (BA) launched the independent craft brewer seal, 432 U.S. craft brewing companies signed up to use the new certified mark on the very first day. As of December 3, 2018 more than 4,000 craft breweries, and counting, have signed on to use the seal. This group of breweries represents more than 85 percent of the volume of craft brewed beer today. Needless to say, we have seen much momentum and reached many milestones in 2018. I wanted to share some insights from this past year.

On August 28, 2018 we were proud to launch the That’s Independence You’re Tasting campaign, the first-ever national advertising campaign by the Brewers Association to support small and independent craft brewers.

Data continues to come in that reinforces the importance of independent ownership and the seal, but it is still early. Rome was not built in a day. Today, 98 percent of the breweries in the U.S. have only an estimated 13 percent of the total market share by volume. As we all know, it’s a long-term game to advance awareness, shelf-space and support for independent breweries. Now 18 months into this effort, we are very pleased that the prominence of the seal continues to grow, but understand that it will take time for some statistics, like purchase influence and year over year sales lift, to hit an apples to apples level. That said, here are some nuggets of interest:

Also, in 2018 the Brewers Association reported a 5 percent growth by volume for craft breweries for the first half of the year (full 2018 statistics will be shared in Q1 2019). This number reflects the cooling of growth we continue to see. It’s fair to ask if that number might have been lower without the independent craft brewer seal and the national campaigns supporting the effort.

As for 2019, stay tuned for more specific data updates that we will add to our retailer sell sheets. 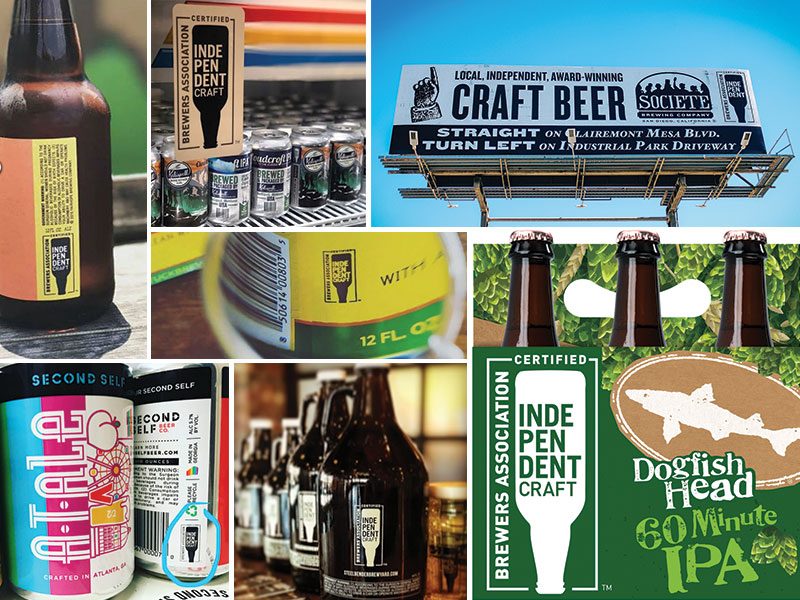 With 4,000 breweries having now adopted the seal, we’re starting to see even more activating it on brewery marketing and packaging in a number of interesting ways. A few gems to share include:

“I am proud to announce that Dogfish Head believes so strongly in the BA’s objective to help small indie craft breweries differentiate ourselves that we are making the BA indie seal as big as we possibly can on our biggest selling beer’s packaging: 60 Minute IPA.”

The broader beerscape, aka beyond breweries, also has many examples. Here are just a few from 2018:

Independent Ownership is a Global Phenomenon

In 2018, we witnessed a global movement dedicated to support independent breweries, with multiple countries also seeing value in a seal.

In 2018 what remains top of mind for me is that research shows that seals work for both sales and trust. With Big Beer acquired brands lacking the transparency of stating their parent company owner, this is an area where craft brewers can continue to provide clarity by use of a seal. The seal flips the script and tells beer lovers the beer they hold is from a certified independent brewery and reminds them that craft brewers turned the beer world upside down evolving it to an even more meaningful place.

Beer drinkers have a right to know when they are purchasing a beer from a large global brewery or an independent one. Many of them want to support small and independent businesses, but BA research shows that many beer lovers cannot distinguish true small and independent craft brands from acquired Big Beer brands. Thus, the pursuit to provide clarity is merited.

The seal captures the spirit of what small and independent craft brewers have achieved. For many people, beer is more than just what’s in the glass—it is also about the people who brew it and who owns the brewery behind the brands.

Today, with an ever-increasing number of breweries having invested to add this new mark to their packaging and marketing, we have traction and ever-increasing reports of “seal sightings” in the market. In 2019, look for continuing campaigns, more retailer support, more market place prominence and activations, and more beer lovers seeking the seal. We are in it for the long-term just like the independent craft breweries who the seal represents.